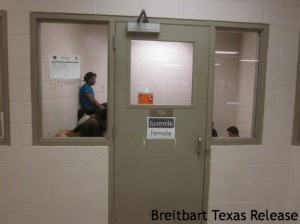 The southern border crisis that has been brewing ever since the Obama administration adopted an unauthorized amnesty for illegal aliens who entered the country as minors, has forced policymakers to address the issue of what can be done to stem the wave of young Central Americans. So far, however, the needed response has remained elusive.

The administration’s focus on the issue, led to the conclusion that a response to the current crisis is complicated by the Trafficking Victims law reauthorized in 2008. That law makes the deportation process not only slow but also easy for immigration lawyers and support groups to manipulate in favor of the illegal aliens. That law, in addition to the administration’s l persistent undermining of immigration enforcement means that it lacks credibility when it tries to convince the aliens and the U.S. public that it will turn the newly arrived illegal aliens around and send them back home. It is a toothless threat. So the administration surfaced the idea of amending or repealing the law so that the Central American minors could be sent home just as Mexican and Canadian illegal entrants who are sent back expeditiously.

But, that proposal has run into furious criticism from defenders of illegal aliens. Most recently, the ACLU filed a lawsuit against the administration to further gum up the deportation process for these minors by insisting that each and every minor must be provided a lawyer paid for by the government. As a result of the flak from the left, the administration failed to include any remedial legislative proposal when it submitted a supplemental appropriation request to fund the agencies that are responding to the illegal alien surge.

While legislative action to eliminate the Trafficking Victims bottleneck is needed, it is not the only issue that needs to be dealt with. A potentially more effective deterrent to the surge in unaccompanied minors is available immediately without legislation. The nature of the action is hinted at in this comment from a senior official involved in the crisis management, who confirmed that minors are being released to the custody of guardians who are themselves illegal aliens. “We do not verify the immigration status of the individual,” said Mark H. Greenberg, acting assistant secretary at the Department of Health and Human Services, adding that it’s department policy not to ask that question.”

It is not against the law to ask for identification of the family members claiming the newly arrived illegal aliens – it is simply a policy not to do so.

Imagine the effect if the family members had to identify themselves and were served a notice to appear for a removal hearing if they were illegal aliens themselves – as is likely in most cases (or otherwise there would be legal options for the minors to come to join the family here). The likely result would be a screeching halt in the funds sent to Central American smugglers to bring these youth to the border.

Would the Obama administration do this? It would have to change the enforcement priority scheme that it is currently applying, but if it seriously was interested in stemming the tide of this growing wave of illegal entrants, it could readily do so.

UACs unaccompanied minors
Previous ArticleTexan Officials Testify State is Overwhelmed by Border Crisis
Next Article Is the Border Crisis Coming to Your Community?