You are at:Home»Politics»The “Most Transparent Administration in History” Huddling Behind Closed Doors with Lobbyists on Immigration 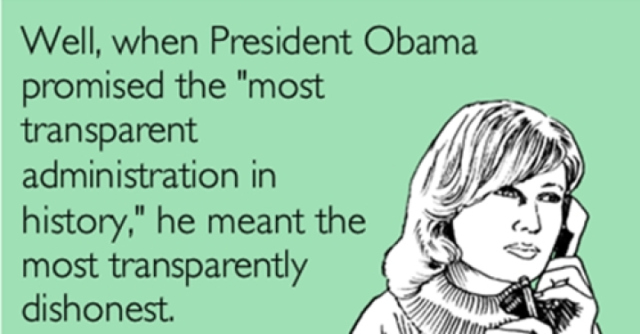 As we all know, this is the most transparent administration in history. We know this, of course, because President Obama has told us so on repeated occasions. Here he is in 2010 and 2014.

Apparently The New York Times hasn’t been paying attention. According to a headline story in Monday’s edition, “Behind Closed Doors, Obama Crafts Executive Actions,” the paper details the many policies that are being made or radically altered in secret. The most prominent example of this sort of secret policymaking, cited by the Times, is the behind-the-scenes effort by the administration to implement a massive, unlegislated illegal alien amnesty.

Noting President Obama’s very public Rose Garden speech in June declaring his intent to take executive action on immigration, the paper observes that, “Since then, the process of drafting what will likely be the only significant immigration changes of his presidency — and his most consequential use of executive power — has been conducted almost entirely behind closed doors, where lobbyists and interest groups invited to the White House are making their case out of public view.” The story goes on to note that, “Cecilia Muñoz, Mr. Obama’s top immigration adviser and the domestic policy chief, has led meetings attended by White House political aides and lawyers to hear from interest groups, individual companies and business groups about what executive actions they believe the president should take on immigration.”

Thus, “the most consequential use of executive power” (or, more aptly, the most consequential breach of the Constitution’s Separation of Powers doctrine) is being hatched “almost entirely behind closed doors” by “lobbyists,” “interest groups,” “individual companies,” and “business groups.”

Even those who agree with the president’s ultimate objective on immigration policy are justifiably concerned about what is going on. We should all be.