You are at:Home»Politics»Executive Amnesty: What Could It Mean? 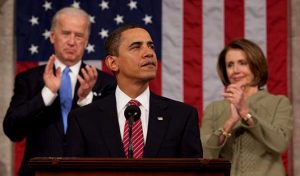 The spate of recent news articles suggesting that President Obama could, by executive action, provide protection against deportation for as many as five million illegal aliens points to an unprecedented political, economic and societal impact on the country. It is unclear where the projection of the number of possible beneficiaries comes from, but it is generally linked to illegal aliens who are family members of U.S. citizens or the illegal aliens who are recipients of the Deferred Action for Childhood Arrivals (DACA) program that President Obama also imposed by executive action.

This proposal, if it materializes, is likely to be characterized as avoiding the separation of families through deportation. It will be accompanied by human interest stories of bright illegal alien students and hard working parents.

The implications of such a proposed action would, however, have an impact much beyond those illegal alien family members. Here’s why:

If the estimate of five million beneficiaries is based on a calculation of the number of illegal aliens already in the country who have DACA recipient beneficiaries or U.S. citizen or legal resident immediate family members, that estimate is vastly understated. The number would likely surge because of the potential for others now outside the country to pack their bags and head here, and for the multitude of illegal aliens already here who do not presently have a connection to a DACA recipient or to a U.S. citizen or resident to attempt to establish those links through fraud.

The proposed new executive amnesty will not just perpetuate the nation’s already unacceptable problem with illegal immigration and super-size it, it will have devastating impacts on unemployed Americans who will be further disadvantaged in looking for work by the new work permits handed out to amnesty beneficiaries. Conceding U.S. jobs to illegal aliens will also drive down wages for American workers – especially those looking for entry and other low-wage job opportunities. It will hurt the economy by giving those jobs to foreign workers who often are sending money out of the country to foreign relatives rather than spending it in the local economy where it is earned.

The societal implications are enormous in adding to the enrollment in taxpayer supported public schools where supplemental English programs drain off resources from native-English speakers and where enclaves of former and current illegal aliens impact social services and real estate markets. These impacts only scratch the surface, but they should make clear that there likely is no one in the country who would not be affected negatively.

Amnesty
Previous ArticleSummer Border Surge of Illegal Aliens Will Cost Local School Districts Millions
Next Article How Many Illegal Alien Minors Have Been Released in Your County?