You are at:Home»Featured»Is Rep. Luis Gutierrez Well-Intentioned or Just Trying to Pick up Votes? 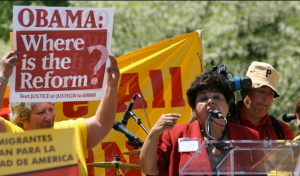 Last Wednesday, Rep. Luis Gutierrez (D-Ill.) joined pro-amnesty advocates who urged the president to immediately issue an executive order that would protect illegal immigrants already in the United States. The congressman also used his soapbox to take shots at other politicians who only use the immigrant issue when it benefits lawmakers. But to those listening in on the teleconference, Gutierrez sounded like he was preaching to the choir.

Gutierrez started out mentioning that in late June, the president said he would complete some form of executive action on immigration by the end of summer. August came and went but Gutierrez and his advocates still have not seen Obama issue an executive order or policy directive that would decrease deportations. Gutierrez said he believes this inaction is the result of lobbying by Democrats pleading with the president to hold off until after the upcoming elections. Some Democrats facing tight races do not wish to be associated with Obama’s “pen and phone” style of leadership and worry the president’s bypassing the legislative process could cost them the support of independent voters.

Gutierrez does not agree. Instead, he explained, the best thing for Democrats to do this fall is to “step aside” and let the president act where Congress has failed to. He argued that if Democrats join Republicans in delaying immigration reform, both parties could be seen as hindering forces.

“We have to stop using immigrants when they’re good for us,” said the congressman.

But Gutierrez may be the type of politician he is in fact warning others about. Moments after his statement, he contradicted himself when he said advocating for immigration reform would mean growing the Democratic electorate in months to come, even before the midterms. He continued mentioning illegal immigrants and those born to illegal parents in the U.S. as keys to growing his party’s electorate. Wooing these voters, Gutierrez suggested, would enhance the likelihood of eventually passing pro-amnesty immigration legislation through a Democrat-heavy Congress.

All of Gutierrez’s ambitions may be too little too late though after Obama announced last weekend that he would not issue any type of broad amnesty memo until after the November elections. The news left some of the president’s biggest supporters stunned at his inability to keep a promise. Furthermore, amnesty advocates could be rethinking their support of Obama and any 2014 political candidates who affiliate with a leader who cannot keep his word.

executive amnesty Obama Administration Rep. Luis Gutierrez
Previous ArticleNew Report: 1 in 10 Workers in California is Illegal
Next Article FAIR Op-ed: Delaying a Bad Idea Does Not Make it a Good One, Mr. Obama