You are at:Home»Immigration Issues»Crime»Open Door in Germany? Not Quite 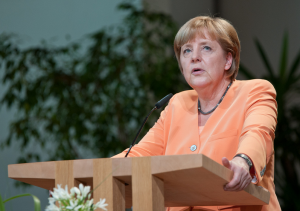 An article written by a German expatriate as a “special to The Washington Times ,” gives a grossly distorted picture of the immigration situation in Germany. At best, Angela Merkel’s stance on immigration is not adequately portrayed.  Merkel is the head of the Christian Democrats, a pro-business party, and her publicly expressed opinions on immigration reflect that. However, there are serious disagreements in her own party over immigration policy, and her position should not be compared to  those of Paul Ryan or Jeb Bush on immigration. She is not for mass immigration and is very careful to mention the welfare of German workers in immigration discussions.

Merkel, as the German Chancellor,  is also the political figure that dominates the Europe Union. Germany has benefitted greatly from the EU and effectively controls the economy of most European (EU and non-EU) countries. Citizens of EU countries have freedom of movement to other EU countries, and this had become a major point of contention within the EU, especially in Britain, France, Italy, and Greece. The EU is in real danger of breaking apart, an event Germany wishes to avoid. Merkel is not about to give ammunition to anti-EU parties (UKIP, Front National) by saying anything remotely critical of EU immigration policies.

The author of the article failed to note the distinction between EU and non-EU immigration. This is a vital distinction. Of course EU immigrants are going to where the jobs are (Germany) or where the welfare state is most generous (Britain). There is mention of Turkish immigrants in the article, who were the majority of non-ethnic German immigrants who came to Germany after WWII as guest workers to fill the jobs that all the dead Germans would not do.  However, in the article, all the immigrants individually mentioned come from EU countries, which is where most recent immigrants are coming from. This misrepresents the current debate over immigration going on in Germany and throughout Europe.

Unlike the United States, Germany does not have birth-right citizenship. It did liberalize its citizenship laws in 2000, but it is still a long process to gain German citizenship. Most of the individuals mentioned in the article would be properly termed guest workers and not immigrants, who have come to Germany to become German nationals and assimilate into German culture. Not surprisingly, the author also failed to mention the Sharia Patrols that have been cropping up in German cities.

A more balanced introduction to the debate surrounding Immigration in Germany can be found here.