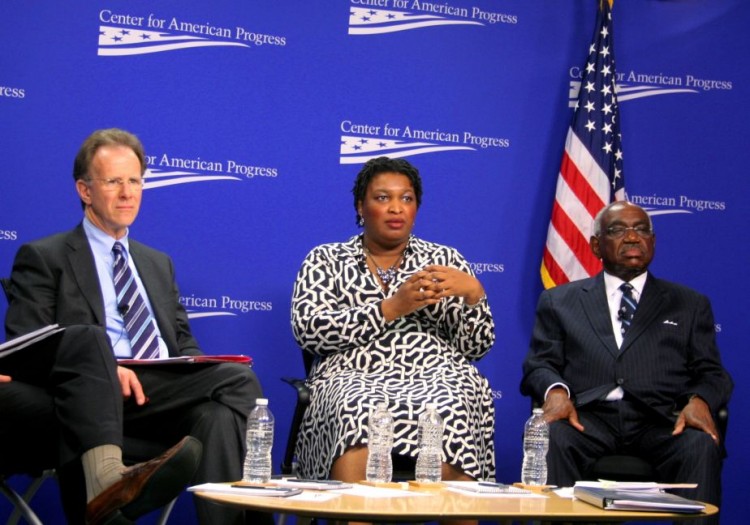 In a recent blog post, Dan Stein detailed newly appointed USCIS Senior Counselor Lucas Guttentag’s long record of undermining U.S. immigration enforcement, while he was director of the ACLU’s national Immigrants’ Rights Project (IRP). In his capacity as the national director of the IRP, Guttentag oversaw the work of IRPs that operate from the ACLU’s state chapters.

The IRP of Georgia’s ACLU chapter is run by Azadeh Shahshahani. Ms. Shahshahani and the Georgia IRP were key players in attempting to prevent a Georgia immigration enforcement law, HB 87, from being implemented. (The legal challenge to HB 87 occurred in 2011 after Guttentag had stepped down as IRP’s national director, but her service as Georgia IRP director overlapped with Guttentag’s tenure.)

Shahshahani also wears another hat. She serves as president of the National Lawyers Guild (NLG), a self-declared “anti-capitalist organization.” In her capacity as NLG president, Shahshahani recently petitioned the International Criminal Court in the The Hague urging the investigation and possible indictment of President Obama for having “aided and abetted the commission of war crimes, genocide, and crimes against humanity.”

The basis of Shahshahani’s allegations against President Obama is that he signed an August 2014 Appropriations bill providing $225 million in aid for Israel’s Iron Dome missile system – a purely defensive weapon that successfully intercepted thousands of Hamas rockets fired at Israeli civilian targets. Also charged in Shahshahani’s letter to the International Court are Secretary of Defense Chuck Hagel and unnamed Members of Congress.

Guttentag’s association with Shahshahani is not restricted to their work with the ACLU’s IRP. Guttentag and his wife Debbie Smith are financial supporters of the NLG, under whose auspices Shahshahani is accusing the president of complicity in war crimes.

As a political appointee within the Department of Homeland Security, Guttentag’s ultimate boss is Barack Obama. Thus, a state director of the national ACLU division that Guttentag founded and ran for a quarter of a century, and the national president of another organization Guttentag supports financially, is openly seeking to have the president he serves brought up on charges of war crimes, genocide and crimes against humanity.

Of course, President Obama is not going to be indicted by the International Criminal Court. What is more important is that the letter reveals just how radical some allegedly mainstream figures in the mass immigration advocacy network truly are. As Dan Stein’s recent blog points out, the ACLU has been key player in just about every legal assault on U.S. immigration enforcement.

What is apparent is that some of the key people who have been driving the ACLU’s immigration agenda are not mere “immigrants’ rights advocates.” At least in Shahshahani’s case, they are committed ideologues for whom destroying the immigration enforcement capability of the United States is a means to a radical political end.

There are certainly questions that need to be answered. Members of Congress need to get some clarification from Guttentag about his relationship with the woman who runs the IRP in Georgia and whose activities he supports with his own money. Congress and the American people have a right to know whether he endorses her views that the president he now serves is a war criminal.

And, having put Guttentag and other like-minded ideologues in key positions in the immigration enforcement apparatus, it is reasonable to wonder what President Obama’s true policy goals are.