You are at:Home»Featured»Why You’re Wrong to Think I’m Against Immigration Reform 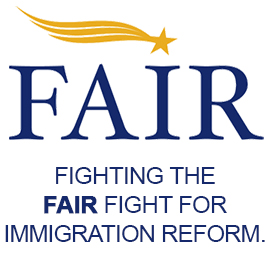 The immigration conversation has deteriorated into an unproductive, polarized “I’m for” and “you’re against” discussion that often ignores the complexity and nuances of the issue.  Divisive labeling most often misrepresents the motives and rationale of groups like FAIR who advocate for – most affirmatively for – secure borders and the rule of law, yet we’re frequently described being “against” everything and opposed to reform.

For the mainstream media, defining individuals and groups as either for or against immigration reform is easy and offers the benefit of implying “good” and “bad” – opposing elements that journalists use to drive the drama of a story.

Although it is certainly easier to sum up one’s position by either of those two words, the latter is one few want to be associated with. Even in issues as heated as the abortion debate, there is at least an attempt to define both sides as being for something. One is either pro-life or pro-choice because people on both sides hold sincerely principled beliefs.

Unfortunately, for those who do not subscribe to the idea that “immigration reform” equates to amnesty for millions of illegal aliens, the policies and principles they do support are rarely mentioned. FAIR is among a number of immigration organizations wrongly categorized by journalists as being “anti-immigrant” – a doubly egregious description. Not only does it attach the inherently negative “anti” label, but it includes the intellectually dishonest conflation of “immigrant” and “immigration,” suggesting that those who want immigration laws enforced bear some animosity toward immigrants.

Instead of researching what FAIR and other like-minded groups support, the press tends to regurgitate a simplistic one-word description, while the sorts of reforms we espouse are not even mentioned.

While our true thoughts are left out, any person who follows current events is well aware of what groups like National Council of La Raza, America’s Voice and Immigration Works advocate for: They want immigration policy to bend to their own political or economic interests.  FAIR-aligned individuals and groups are called anti-reform but none of that is true. In fact, we want to reform immigration that places the interests of the American people paramount.

We want the type of reform that acknowledges that our immigration laws exist to protect the economic, social, and security interests of the American people. None of the legislation under serious consideration in Congress – particularly the Senate Gang of Eight bill, S. 744 – comes close to meeting this description.

Both sides in this debate are for immigration reform. It’s just that we have very different ideas about what those reforms should look like. Ironically, despite the negative labeling, recent polls suggest that when it comes to immigration reform, a majority of Americans are for what FAIR is for.