You are at:Home»Featured»Why Immigration Reform is the Perfect Example of an Environmental Issue 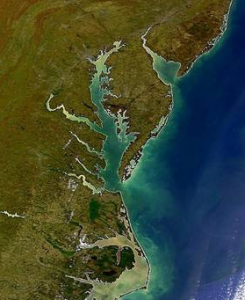 Immigration is undoubtedly a hot topic in this year’s elections. For a handful of states that surround the Chesapeake Bay, it is closely related to the issue of conservation, which has been at the top of voters’ concerns for more than a decade…or at least it should be.

The Chesapeake is one of the country’s most remarkable natural resources. The 4,479-square mile bay serves as a channel between northern rivers and the Atlantic Ocean, and is essential to sustaining the region’s 17 million people.

However, sharp population increases since 2000 have contributed significantly to pollution of the water and land. The bay’s resources are being increasingly strained. Much of the region’s increased population is the result of loosened immigration laws. Immigration was responsible for 40 percent of the Chesapeake region’s population growth between 2000 and 2009.

Although groups like the Chesapeake Bay Foundation want to protect the bay’s fragile ecology, they have failed to link the symptoms – chemical contamination, habitat loss, air pollution, the rising cost of clean water, natural gas drilling and outdated sewage systems – to overpopulation.

The foundation has mailed local political candidates a list of nine actions that must be taken in order to redeem the bay’s filthy waters and restore the ecosystem to healthy levels. Some of those steps are being funded by the federal government, which announced last week it has allocated $10 million dollars to clean up the bay.

While politicians are eager to commit to the idea of saving the bay and organizations endlessly advocate for a resolution, the root of the problem remains buried beneath those murky waters. Until a leader or organization makes the connection between immigration and overpopulation, true change will not take place.