You are at:Home»Featured»What Is The Optimum Level Of Immigration To The United States? 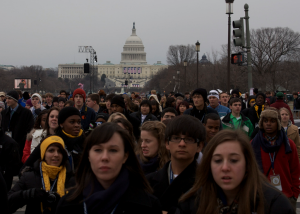 The above question presumes that there is a rational immigration policy that serves the national interest. But, there isn’t. What serves as a policy is a hodge-podge of disparate provisions that respond to particular interests. The largest of those interests is that of earlier immigrants who want to sponsor family members and other co-nationals. Employers in various sectors of the economy have vested interest in an increased supply of workers looking for work. Real estate developers and home builders are buoyed by a growing population fueled by immigration. And among these and many other special interests are those who simply believe the policy should be based on taking in the ‘tired and poor yearning to breathe free’ and one-worlders who reject the idea of borders.

All of those vested interests and ideological or religious positions fail to recognize a need for immigration limits – or at least a limit that would run counter to their position. Add to this mix of interests promoting mass immigration the fact that most politicians – at both the local and national level – see immigration as a political issue on which they can accommodate constituent interests by supporting increases in various categories of immigration.

FAIR is one of the few organizations that advocates for an immigration policy in the national interest. Our view that there must be rational limits to immigration is not unique, however. The last time a national commission was established to study immigration policy and make recommendations was when the U.S. Commission on Immigration Reform (USCIR) was established in the early 1990s. It issued a series of reports between 1994 and 1997. Among its recommendations, “It concluded that the current immigration system’s core element of chain migration [family–sponsored preferences] was not in accord with national interests and urged the adoption of a new system scaling back significantly on overall immigration levels. See U.S. Commission on Immigration Reform. The recommended base annual level was set at 550,000 immigrants per year. That was about a third lower than the level of entries at that time, and much lower than the current rate of more than a million new legal immigrants per year. The Commission also found that admitting unskilled immigrants sponsored by an employer made no sense because of the competition with the nation’s own unskilled workers, and it found no justification for continuing a visa lottery to promote greater diversity in the flow of immigrants.

FAIR supported the recommendations of the Commission, although they did not go as far as necessary, in FAIR’s opinion, in reducing immigration as would be necessary to bring immigration policy into line with long-term national interests.

What is the long-term interest? That focus is consistently missed in the plethora of speeches and policy papers and studies focused on immigration policy, including the reports of the USCIR. The long-term focuses on the fact that we live in a world of limited resources – land, food production, fresh water, hydrocarbons (wood, coal, petroleum, etc.), minerals, etc. The world’s rapidly growing population is increasingly challenging those limits. That is the consensus of national and international experts including those of the United Nations Population Division. There is international consensus on the need to stop the rapid population growth currently projected to result in a global population of about 11 billion people by the end of the century – up from about 7.2 billion today. That projection has dire implications for all of the reasons related to limited resources – especially food production.

The United States is much better able to cope with dwindling world resources than other countries because we are endowed with a vast area and natural resources, but that does not mean that we can ignore the fact that we too face finite limits. The country is already facing fresh water scarcity in large areas of the country and currently enhanced petroleum extraction does not mean that finite national supplies are limitless.

The U.S. population soared from less than 180 million persons in 1960 to 319 million today according to Census Bureau statistics. That is an increase of nearly 80 percent in 54 years. Immigration is the largest component of that increase. At the present time about 75 percent of U.S. population increase is due to new immigration and the children born here to those new immigrants. That share of overall population increase has been steadily rising and is projected by the Pew Hispanic Center to rise to about 82 percent by 2050, based on current immigrant intake. But Congress has been considering a so-called ‘comprehensive immigration reform’ proposal – passed by the U.S. Senate last year – that would vastly expand the volume of immigrant arrivals.

The proponents of this ‘comprehensive’ measure represent the same collection of vested interests that has resisted the reform recommendations of the USCIR and has asserted that the reforms that would benefit them would be in the country’s interest. They ignore entirely the issue of long-term limits. That is one of the key why FAIR has opposed this legislation even though it includes a few of the policy changes recommended by the USCIR.

So what would be the immigration limits that would be in the U.S. national interest and why?

Obviously, the United States cannot stop world population growth by limiting U.S. population growth, but it can contribute to it. By working towards a stable U.S. population at a level that is sustainable in the long term, the country will be increasing its capability to assist other countries that are not as fortunate in natural resources.

The first objective of a rational long-term immigration policy should be one that contributes to U.S. population stability. That does not mean stopping immigration, but it does mean bringing the quantity of newcomers admitted into line with the number of U.S. residents leaving the country to live abroad. That level at present is estimated to be about 350,000 persons annually. That level is significantly higher than the average annual immigration intake between1925-1975. Clearly with a reduced level of immigration, the policy should assure that those arriving are those invited to join our society rather than those who arrive in violation of our immigration law.

Longer term, immigration policy should be tied to the country’s ability to support the population, i.e., its carrying capacity. Within that limit, it is fair for the vested interests that benefit from immigration to make their case for their interests, but only within the limits dictated by the overall long-term interests of the nation.

A succinct academic look at the issue of international population increase and carrying capacity is here.