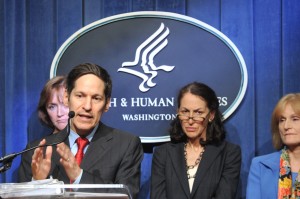 According to a Washington Post-ABC News Poll  released Tuesday, 67% of Americans support restricting entry to the United States by people who have been in countries struggling to contain the Ebola epidemic, with only 29% opposed. Such support is bipartisan, with 60% of Democrats, 76% of Republicans, and 68% of Independents supporting such restrictions. The poll was conducted last week, between last Thursday and Sunday.

However, at least as of Wednesday, the Obama Administration had no plans to consider this policy supported by overwhelming numbers of Americans. At a field hearing in Texas by the House Homeland Security Committee, several Representatives asked officials from the Centers for Disease Control and Prevention (CDC) and the Department of Homeland Security (DHS) why they were not considering any sort of travel ban, but the answers didn’t make any sense.  (See FAIR’s latest Legislative Update)

Dr. Toby Merlin, the CDC director in charge of emerging infectious diseases, kept repeating that he knew from experience that interrupting travel would make the disease spread faster in Africa. While he suggested travel interruptions would prevent help from coming in, and military “workarounds” could not help, he did not explain why private as well as military planes could not more than fill any gaps created by restricting commercial travel in bringing help to stricken countries.

Even more alarmingly, when Representative Michael Burgess (R- Texas) asked at what point in the growth of the disease the Administration ought to try something different, like stopping the importation of the disease into the country, Dr. Merlin refused to even consider the question, saying only that we need to stop the growth of the disease “in Africa,” and that to do so, we already need to pull out all the stops: “because the risk in this country will not be eliminated until we eliminate the spread of disease in Africa.”

As a way to stop a pandemic, what he says sounds absurd.  How could stopping nationals of affected African countries from traveling around the world and to the United States prevent our focus on sending in aid to those affected countries, when such travel to Africa of specialized aid workers is entirely independent from travel out of visitors?

However, now the CDC seems to have dropped this explanation of why there is no travel ban and adopted a new one. In a House Energy and Commerce Committee hearing today, Rep. Fred Upton (R-Mich.) asked Dr. Tom Frieden, the director of the CDC, why the U.S. is not considering travel restrictions when other countries have already instituted them.  This time, Dr. Frieden said that we cannot restrict air travel because the borders of affected countries in Africa are porous, and so infected people could get on planes in other countries and fly to the United States, but we will have less information about them.

The news about Ebola has only gotten more worrisome since the poll that showed 67% of Americans in favor of such a ban was conducted. Two nurses who cared for Thomas Eric Duncan, the Liberian Ebola patient who was the first to be diagnosed with the disease in the U.S., have since been diagnosed with the virus. Both of these cases show that health care providers are far more at risk than the CDC was admitting last week.  It turns out that, because the Ebola virus replicates wildly as the disease becomes more advanced, health care workers and others caring for Ebola patients at the end of their lives are actually very much in danger. Yesterday, a nurse’s union alleged that despite the CDC’s assurances, in fact, the Dallas hospital that treated Duncan actually had an egregious lack of safety protocols sufficient to protect its workers and patients. Though it still won’t support a travel ban from West Africa, the CDC is now preventing the health care workers who treated Duncan from travelling, after news reports revealed that it cleared one of the nurses to board a commercial airliner even after she told the CDC she had a slight fever.

Speaking on MSNBC’s Morning Joe on Monday, Rep. Burgess again brought up the importance of considering travel restrictions. Burgess, who himself is a physician and actually worked at that very hospital in Dallas, pointed out that average community hospitals can’t be expected to staff up and run the type of isolation unit that specialized hospitals have spent years preparing.

Such a point is very important, for it shows that while we may well be able to transport stricken Americans, like Dr. Kent Brantley, who catch Ebola from treating the epidemic in West Africa, to specialized facilities, we cannot predict which hospitals might be forced to treat ordinary commercial travelers. Like Mr. Duncan, travelers from West Africa may step off a plane and show up at a community hospital anywhere in the country once they develop symptoms, and many of these hospitals will not be able to ensure the safety of their health care workers and other patients.