You are at:Home»Featured»Executive Amnesty: How Big, Mr. Obama? 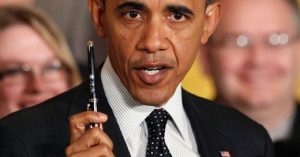 As everyone knows, President Obama bowed to political pressure and decided to wait until after the election to issue his latest, greatest amnesty decree. He did so because Democrats in close races were concerned that the President’s imperial gestures on behalf of the illegal alien population might collide with the needs and interests of American citizens voting today.

So be it. But here’s a concern: If the Democrats lose the Senate and Obama’s immigration gamesmanship gets the blame, won’t the president figure, well the damage is already done, let’s just “go big” on amnesty? The American people have the right to ask, “So just how big is it, Mr. President?”

His 2012 Deferred Action program (DACA) has already included nearly 600,000 aliens into its kingly sweep. The unlegislated amnesty we are likely to see after the election will dwarf that number. No principled limitation on this power has been identified by this administration, and yet those who have received this royal pardon seem unconcerned about future enforcement action.

This campaign season has featured an unprecedented spectacle of illegal aliens harassing elected officials and candidates in public forums – all unleashed by the brazen power politics of the administration. This is surely an outrage – and the president must know it is viewed this way. He also must know that despite his efforts to draw arbitrary lines based on his apparently superior moral compass, he will never succeed in justifying a broad overreach of executive authority to grant de facto amnesty and work authorization to millions of illegal aliens.

After the election, especially if the Republicans take the Senate, the president will view himself as ruling alone. Thereafter, what remains to constrain him? Every day, his administration is finding new ways to evade immigration limits and laws, using parole and refugee policies as well as limitless non-existent discretion to accelerate the admission of otherwise inadmissible aliens.

Getting the usual pass from what now passes for the American media, the president must truly believe that ancient maxim “the king can do no wrong.” Having already demonstrated an utter contempt for the enforcement of statutory immigration limits enacted by Congress, we can expect a truly lawless, alarming abuse of power. This civic breakdown constitutes a troubling threat to the fabric of our society because it affirms that a growing number of the nation’s laws can be broken at will.

As Allan Bloom has observed, “Once the law is broken with impunity, each man regains the right to any means he deems proper or necessary in order to defend himself against the new tyrant, the one who can break the law.”