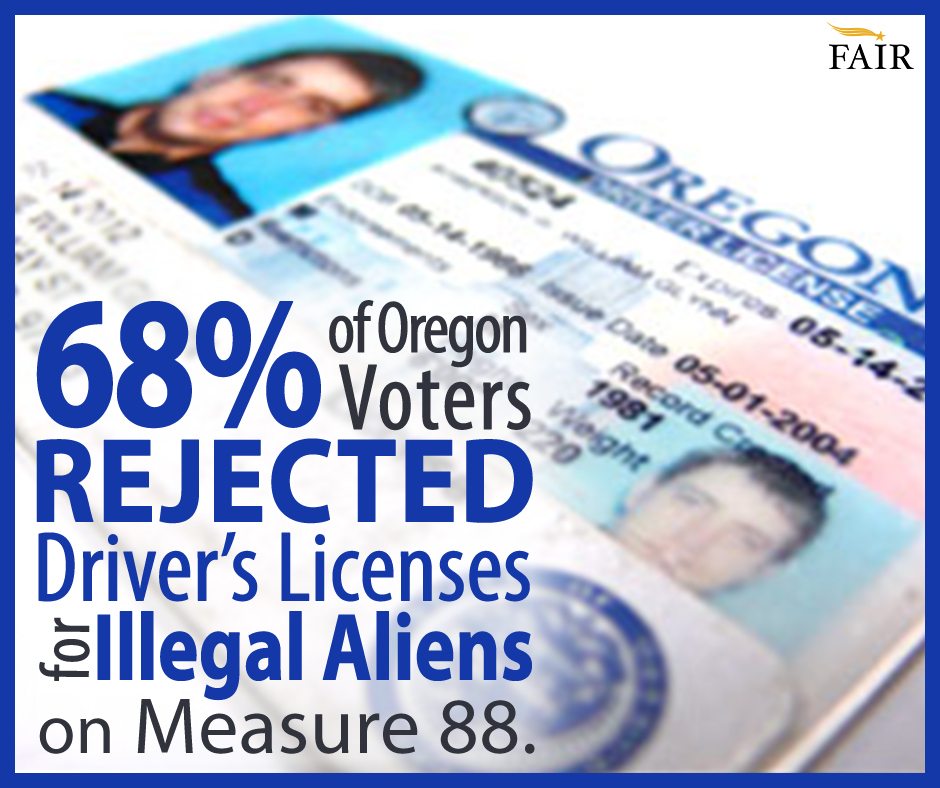 Voters in Oregon overwhelmingly rejected a law passed in 2013 that would grant driver’s license cards to illegal aliens. (Oregon Live, Nov. 5, 2014) Ballot Measure 88, which put Senate Bill (“S.B.”) 833 up for voter approval, was defeated by a landslide of 68% of voters in favor of vetoing S.B 833, with only 32% in support of the law. (Id.) The defeat of Measure 88 marks a huge victory for true immigration reformers in Oregon and nationwide. Currently, eleven states grant driver’s licenses to illegal aliens. However, activists in Oregon were the first state to hold their elected representatives accountable and put the question on the ballot.

Opposition against Measure 88 was entirely a grassroots effort. Oregonians for Immigration Reform, a local group whose mission is to support enforcement of immigration law, initiated the referendum of the law by working tirelessly to gather over 71,000 signatures in just a few months to get Measure 88 on the ballot. (Breitbart, Oct. 21, 2014) Supporters for the Measure included illegal alien lobby groups, labor unions, and businesses that profited off of the availability of cheap, illegal labor. (Oregon Live, Nov. 4, 2014) True immigration reformers raised only $37,000 to fight Measure 88, compared to the $421,000 raised by the illegal alien lobby to support it. (Breitbart, Oct. 21, 2014)

The movement to defeat Measure 88 gained momentum in April when sheriffs representing all 36 counties in Oregon came out in opposition to the Measure. (Oregon Live, Sept. 22, 2014) Sheriffs of Oregon Political Action Committee, which represents Oregon sheriffs, issued a press release stating: “The Sheriffs of Oregon support the citizens veto referendum #301 to overturn S.B. 833. We urge a NO vote.” (Id.) Tom Bergin, current Clatsop County Sheriff and former President of the Oregon State Sheriff’s Association, added, “It is wrong to provide special driver’s licenses to people who cannot prove legal presence in the United States. For Oregon to do so, will only enhance the ability for criminal behavior, thus creating a larger risk to our citizens public safety. The Sheriffs of Oregon urge you to oppose this Measure.” (Id.)

Supporters of illegal alien driver’s licenses appealed to public safety concerns, arguing S.B. 833 would improve public safety and increase the number of insured drivers on state roads and highways. (Portland Tribune, Oct. 16, 2014) These arguments, however, lost credibility after the law enforcement adamantly spoke up against the law. Dave Driscall, a retired Salem Police officer, described Measure 88 as “just a way for a select group of people to avoid Oregon law. It will not increase traffic safety or lower the number of uninsured drivers in this state. If allowed to stand Oregon could become a safe haven for criminals and terrorists.” (Oregon Live, Sept. 22, 2014) Indeed, a study published in the Journal of Insurance Regulation in 2011 reported that the average percentage of uninsured motorists is actually higher in states that have no lawful presence requirement for obtaining driving privileges. (National Association of Insurance Commissioners)

True immigration reform activists in the state were thrilled to learn of the outcome of the referendum. (Statesman Journal, Nov. 4, 2014) Cynthia Kendoll, president of Oregonians for Immigration Reform, commented, “We wanted to get it to the ballot, and we wanted to let Oregon voters decide this issue. I think they’ve spoken loud and clear.” (Id.) Kendoll stated the outcome was a victory for those “sick and tired of big business, special interest groups and unions controlling our government.” (Oregon Live, Nov. 4, 2014)