You are at:Home»Federal»Congress»Harry Reid Calls on Obama to Delay Executive Amnesty 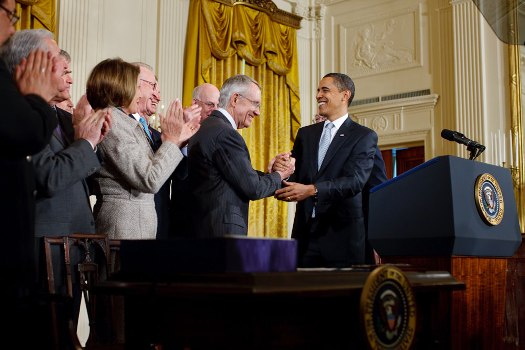 No, that’s not a misprint.

Less than 24 hours after Fox News reported that a leaked White House 10-point executive amnesty plan is set to be unveiled next Friday, the out-going Senate Majority Leader urged the president to hold-off at least until Congress has come up with a plan to fund the federal government beyond Dec. 11.

Let’s be clear, Harry Reid, who arbitrarily changed Senate rules during the eight years he has presided over the body, is not taking a principled stand here. Like everything Reid does from the moment he rolls out of bed in the morning, his motives are political.

Here are some of the political considerations that may be motivating Reid’s request for a delay in the president’s announcement of executive amnesty:

Harry Reid looks out for Harry Reid. While it is true that in the next election cycle there are more vulnerable Blue State incumbent Republicans who will be on the ballot, giving the Democrats a chance to retake seats, there are also some vulnerable Democrats up for re-election. One of those happens to be a guy named Harry Reid. Reid barely hung on to his seat in 2010 and he cannot count on the Republicans nominating a weak opponent as they did four years ago.

Other Democrats may not want to have to defend an unpopular rogue lame duck president. Every Democratic member of the Senate voted for the Gang of Eight amnesty bill in 2013. The most vulnerable of those – Mark Pryor, Mark Udall, Mark Begich, Kay Hagan – are packing up their offices and may soon be joined by Mary Landrieu. Senators in safer Democratic states may get a pass from voters for having voted for an unpopular amnesty bill. Being forced to defend a president making a blatant end-run around the constitution to force amnesty down the throats of the American people in quite another matter. Harry Reid, who is not that popular himself, could well be getting pressure from his caucus to send a message to the White House.

This time a government shutdown could backfire on Democrats. Political brinkmanship that results in government shutdowns is never popular with the voters. The past two times a budget impasse has resulted in a shutdown, the Republicans have borne the brunt of the blame. This time could be very different. If Republicans send the president a spending bill that includes explicit language defunding an unconstitutional executive amnesty and the he vetoes it, the public will hold him and his party accountable. Holding the entire country hostage to an unlegislated illegal alien amnesty will not play well anywhere in the country.

Make no mistake – if Harry Reid thought for one minute that subverting the interests of the American people and the Constitution would be politically advantageous, he would not hesitate. The fact that Reid is asking the White House to hold-off ought to be seen as a clear indication that they will have the support of the American people in a defunding showdown with the president.