You are at:Home»Immigration Issues»The Audacity of Amnesty: How Obama’s 2006 Admitted Fear of Record Immigration Has Come Back to Haunt Him 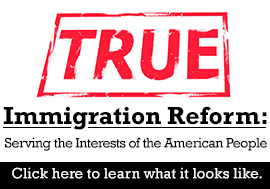 Instead of finalizing the details of a 10-point immigration plan the White House is expected to debut this week, President Obama may need to explain the contradicting views on immigration that he included in his 2006 autobiography, “The Audacity of Hope.”

According to the Daily Caller, Obama carved out a chapter of the memoir to share his thoughts on immigration, including concerns about the negative effects record levels of immigration were already having on the country’s economic well-being.

The book’s message – a call to reclaim the American Dream – was intended to woo undecided voters; especially blue-collar workers whom he acknowledged had a legitimate concern of losing their jobs to immigrants willing to work at lower wages.

In light of these new-found remarks, allegations that true immigration reformers in the Republican Party have made against the president, in regard to high immigration levels causing job displacement, a growing income gap and overpopulation, have been validated by Obama’s own statements below.

Despite the views he shared eight years ago, Obama is now adamant about destroying the very people he claimed he wanted to help, by providing work authorization for 5 million illegal aliens sometime this week. It will result in illegal immigrants competing directly with the groups he specifically said would be harmed by unabated, large-scale legal immigration.

Additionally, the New York Times is pilling on the criticism, calling him out on previous remarks that executive action on immigration would violate our laws and be “very difficult to defend legally.”

Perhaps the reason the president never initiated executive amnesty during his six years in office is because he knows it would be a breach of the Constitution and of the faith the American people have in their chief executive.