You are at:Home»Federal»Congress»President Obama’s Immigration Orders Sweeping in Scope 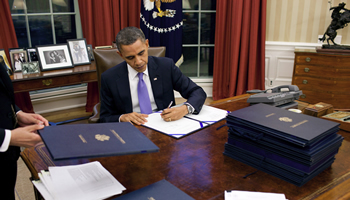 As President Obama concluded his prime-time speech last Thursday, Homeland Security Secretary Jeh Johnson released ten immigration policy memoranda that are sweeping in the number of aliens they cover and the relief they provide. Combined, the policy memos apply to approximately 5 million illegal aliens in the U.S. and an untold number of aliens outside the U.S. who will be allowed to enter the U.S. under new policies designed just for them. In terms of relief, the policy memos offer illegal aliens relief spanning from deferral of deportation and work authorization to a pathway to citizenship. They also create special exceptions for certain workers seeking to enter the U.S.

While the detail covered in the memos is breathtaking, here is a short summary of some of the major changes to immigration law made by the Johnson Memos… Read More – Legislative Update: 11/24/2014

executive amnesty Johnson Memos
Previous ArticleWe heard the President, but did he hear the American people?
Next Article Happy Thanksgiving from FAIR