You are at:Home»Politics»Speaker Boehner Won’t Commit to Defunding Executive Amnesty — EVER 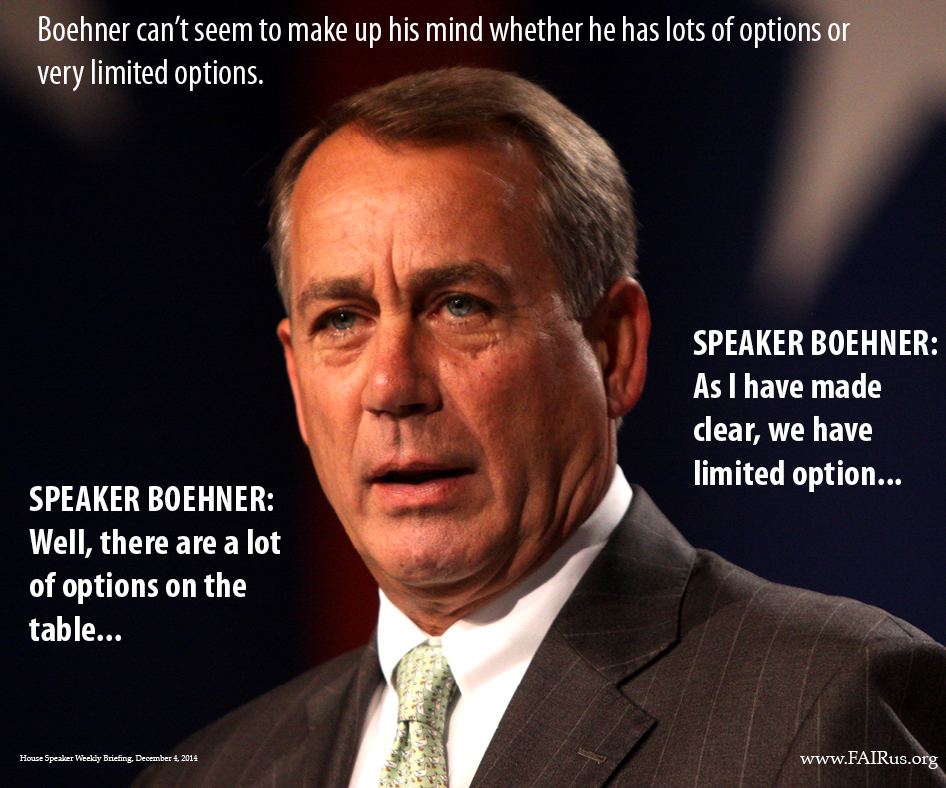 Despite vowing to fight President Obama’s executive amnesty “tooth and nail,” House Speaker John Boehner (R-OH) is now refusing to commit to defunding President Obama’s executive amnesty — now or ever! Boehner made the comments last week during a routine press briefing in the Capitol. When asked repeatedly about how Republicans will actually block the amnesty, the Speaker would say nothing more than he was “not going to get into hypotheticals into what we could or couldn’t do.” (The Weekly Standard, Dec. 4, 2014) He then added, “I do know this: Come January, we’ll have a Republican House and a Republican Senate — and we’ll be in the stronger position to take actions.” (Id.)

Speaker Boehner’s comments came just days after he announced he would not defund the executive amnesty in the appropriations (funding) bill currently being negotiated by Members of Congress. Under the Speaker’s plan, the House will vote on an appropriations bill that funds most of the government through September 2015, but only funds the Department of Homeland Security (DHS) until February or March. (FAIR Legislative Update, Dec. 2, 2014) So, while Congress will be able to once again address the Homeland Security budget in February or March, the bill will not contain a provision that strips funding from the President’s executive amnesty. Thus, under the Speaker’s plan, the government funding will go through, but nothing will be done to stop the President’s executive amnesty.

The Speaker, who many believe supports “comprehensive” immigration reform, is determined to push through his plan this week despite vast opposition from conservative members of his party. Indeed, Boehner is relying on pro-amnesty Democrats to pass the appropriations bill, telling reporters “I expect it will have bipartisan support to pass the omnibus appropriation bill.” (The Hill, Dec. 4, 2014)

Congress is expected to vote on the bill tomorrow. The current government funding bill expires on Thursday, which is also the last scheduled day of the 113th Congress.