You are at:Home»Featured»One Reason Regime Change Never Happened in Cuba 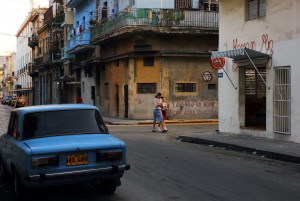 The big story this week is that President Obama exercised executive authority to restore diplomatic relations with Cuba and make other substantive changes in our dealings with that island nation.

FAIR does not take a position on foreign policy matters such as this. But the news should lead people to wonder why, after more than half a century during which regime change has been the stated or tacit objective of U.S. foreign policy, Cuba remains a dictatorship under the firm control of the Castros. We recently marked the 25th anniversary of the fall of the Berlin Wall and 23rd anniversary of the collapse of communism in the Soviet Union. This year also marks 20 years since the Apartheid system in South Africa came to an end and the peaceful transfer of power to majority rule.

Among the old Soviet bloc dictatorships, Cuba has stubbornly resisted political change. Why has there been no Lech Walesa, Vaҫlav Havel, Nelson Mandela, or even a Mikhail Gorbachev in Cuba to challenge the status quo? Surely, people in Cuba desire the same changes that the people of Eastern Europe, the Soviet Union and South Africa yearned for. While Raoul Castro may be marginally more enlightened than his brother, real change has not come to Cuba.

One possible explanation may be that for all the boycotts, embargos and half-baked plots the United States has attempted to depose the Castro regime, we have also done perhaps the most important thing necessary for them to cement their grip on power. Over the course of more than 50 years, we have systematically relocated Cuba’s dissidents to our shores.

The Lech Walesa or Nelson Mandela of Cuba is probably in Miami. From South Florida and elsewhere in the U.S., Cuban critics of Castro have been free to rail against the despotism of the regime. But the Castros don’t seem much concerned about bad PR. What they care about is maintaining power and with their strongest challengers 90 miles or more offshore they have been able to do precisely that.

Of course it is easy for us in the U.S. to sit back and urge Cuban dissidents to speak truth to power, when the power is wielded by a ruthless regime that has demonstrated that it will do just about anything to suppress opposition. But the reality is that every revolution has its martyrs. Authoritarian regimes do not yield power willingly. Mandela sat in prison for 27 years. Walesa, Havel and others who brought about change in Eastern Europe also saw the insides of the prisons of the regimes they were challenging. And then there are those who paid the ultimate price and sacrificed their own lives in the effort to liberate their homelands.

Surely there are those dissidents who did stay in Cuba, and many of them have been or remain imprisoned. Others have died for the cause. What they have lacked is a solid core of a dissident movement, because that core is in the United States rather than in Cuba.

Perhaps the policy changes announced by President Obama will eventually lead to meaningful reforms in Cuba – although it does not appear as though any such commitments were extracted from the Castro regime in exchange for Obama’s moves. And perhaps they won’t. Only time will tell.

But what time has already told us very clearly is that alleviating pressure on despotic or corrupt regimes through our immigration policies inhibits change. It didn’t work in Cuba and it has inhibited political, economic and social reforms in Mexico and Central America, where the power elite have been able to alleviate pressure for real reform by exporting those who suffer the most from their corruption.

The lesson of Cuba is that change must come from within. Mass migration helps those who emigrate, but it ensures that things will stay the same, or get worse in the countries they leave behind.