You are at:Home»Immigration Issues»Education»Feds Going After Schools to Assure English Instruction for Illegal Aliens 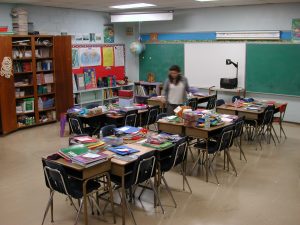 The Obama administration is opening a new front in its efforts to coddle the illegal alien population. Illegal aliens are not being deported under the “prioritization” guidelines, and millions more are being affirmatively protected under and the president’s new amnesty for illegal aliens who are parents of legal U.S. residents. In addition, the administration continues to release Central American juveniles to parents or guardians around the country, many of whom are illegal aliens themselves. Now, besides making sure that the growing numbers of illegal alien youth have comfortable access to public schools, the administration is turning to hectoring the school districts to provide them high quality supplemental education to help them integrate into the society.

According to a report in the January 8 Washington Post a joint letter has been sent from the departments of Education and Justice to school administrators instructing them that under federal law students learning English as a second language are guaranteed targeted help and a high-quality public education. The inclusion of the Justice Department in this message is a veiled threat that non-compliance is likely to bring legal action against the local officials.

This might make some sense if the federal government was funding the ESL instruction. But, the federal government funds only a token amount, and the bulk of the burden is borne by the local taxpayers and to varying extents from state revenue. That, in effect, makes the burden dumped on the local school districts and the states an unfunded mandate.

This new focus follows administration efforts to prevent local school districts from asking for information that might document the number of children of illegal aliens enrolled in the schools. Thus, it appears that the administration doesn’t want the local school districts to be able to track the burden placed on them by the presence of illegal alien residents in their area but it will insist that those districts are funding high-quality remedial educational services to them. Will this mean that new federally mandated standards for ESL instruction are forthcoming from the Department of Education? Stay tuned.