You are at:Home»Federal»Congress»GOP Selling Out? 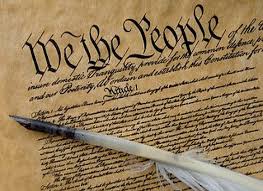 The President’s Amnesty:  It’s Not about Policy, It’s about  Power and the Future of the Constitution

The Republicans in Congress started quickly out of the gate and seem to be losing steam fast. The boiler is hot, but cooling off quickly as Harry Reid seems to still run the Senate. Will the Republicans “defund” the Obama illegal amnesty memos? Or will they let it ride while protesting in a loud and futile manner? Listening to the comments coming out of the Hershey retreat suggests that many Republican Senators would rather let the President’s actions go unchallenged with a Hershey’s kiss until later ratified by legislative acquiescence. Not only is this not leadership, it is a tragic denial of basic reality: the nation has entered a long-term immigration-related crisis and few in Congress are willing to admit the reality.

The Republican Caucus seems to think this is a policy dispute, and the current discussion is being conducted on the President’s terms. Many Republicans act like what the president did with his amnesty was simply a policy dispute when in fact it’s about innovating an unchecked power. This innovation, left to stand, would permanently diminish Congress’ role in ensuring the nation’s capacity for self-determination.

The president has asserted a dark and dangerous power that operates beyond the scrutiny of the Congress and the Judiciary. He has claimed a right to ignore U.S. immigration laws and either admit millions or allow millions to stay without any basis in law. Obama has claimed a power to bring in millions and place them on a path to all our jobs and our expensive social welfare, medical and retirement programs. He has arrogated unto himself a limitless power to cost taxpayers hundreds of billions – or more – over future decades and change everything about what it means to live in America.

Shamelessly, the Administration has forged a coalition with allies who simply want to destroy U.S. immigration limits and controls. These allies shamelessly work to divide the public along racial lines, and applaud the collapse of enforcement, the release of criminal aliens, the profligate issuance of work authorization and the accumulating incentives that reward illegal immigration. The implications for the future are profound, and yet the Republicans think the solution is to “pass a border bill” of questionable efficacy and then get to work inflating guest-worker programs for favored donors. The people are catching on, and the entire exercise may soon make Congress appear either irrelevant or foolish – and permanently out of touch with the public.

It is hard to believe either political party would so willingly go along with the total marginalization of Congress in the nation’s affairs. It’s hard to believe the Congress itself would let that happen. Yet that is what is happening. The next 15 months will tell us what we need to know.

To live in a country that cannot manage immigration is to live in a social, political, economic and environmental storm. It will be upon us sooner than you think.

Amnesty constitution defund amnesty
Previous ArticleDan Stein Op-Ed: House Must Stand Firm Against Obama’s Amnesty
Next Article #2 of 5 – Five Things the Republican Congress Must Do in 2015 (with Resources)