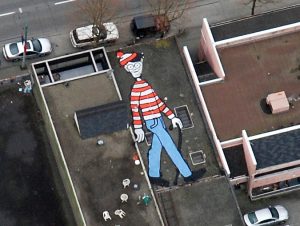 The Southern Education Foundation (SEF) reported that the share of current K-12 public schools students living in poverty is a majority. The Washington Post in reporting this information stated that this was the first time in at least 50 years that the level is so high.

In its analysis, the SEF used enrollment in free and subsidized school meals as an indicator of the size of the student poverty population, and found that these students were concentrated in the South and Southwest of the country.

The coverage in the newspaper discussed at length the need to provide greater funding to improve the educational opportunity for low-income students and noted that the administration has called for both increased educational funding and the establishment of universal preschool for children in low-income families.

What was missing from this analysis was any discussion as to why the number of poverty level students (the Waldo in the picture) has risen so high and so fast. It is typical of the education community, the Obama administration, and newspapers (e.g., The Washington Post) to look at social problems, such as the surging level of children in poverty, and then to discuss how more tax resources need to be thrown at the problem to resolve it.

If, instead, the spotlight were shifted to what has led to the problem, i.e., the source of the growing school kid poverty population, they would realize that the administration’s lax immigration enforcement policy has fueled the surge of illegal immigrants many of whom have brought their children with them or have given birth after their arrival. Research shows that a there is a disproportionate share of the illegal immigrant population among those living in poverty. In addition, the presence of millions of illegal aliens allows employers of low-skilled workers to hold down wages, which contributes to the depressed income of native-born low-skilled workers.

If there were a shift in focus from the problem as a resource issue and instead studied it as a source issue, a remedial response to the problem would become obvious. The upward trend in children in poverty could be ameliorated by a change in immigration law enforcement to discourage new illegal immigration and encourage those living illegally in the United States to return to their home countries and take their children with them.

But, for those who wear blinders, Waldo is not in the picture.