You are at:Home»Politics»Website on Immigrant’s Share of Population Increase 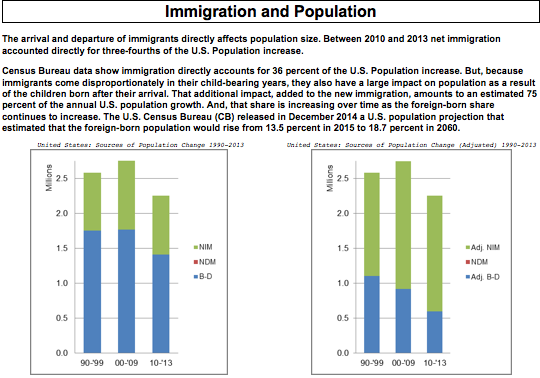 A new data resource is available for better understanding the major role of immigration in driving the rapidly rising U.S. population by Federation for American Immigration Reform Spokesperson, Jack Martin. The website is www.immigrationandpopulation.com.

Over the last half century, the country added 130 million residents to the 170 million population in 1960 – a 72.5 percent surge. The foreign-born resident population soared even faster, by 310 percent, and rose from 5.4 percent of the population to 12.9 percent. These data, however, do not fully describe the role of immigration in population increase. Immigrants also contribute to population increase as a result of the children they bear after arrival. This is at a rate higher than the rate for the native-born population.

When an estimated share of births minus deaths (natural change) among the immigrant population is added to the increase from net immigration (newcomers minus those moving from the country) the share rises to about three-fourths of the population increase. A recent Census Bureau population projection forecast that the trend in growth in the foreign-born share of the U.S. population will continue.

The new website provides the Census Bureau population data for the nation, for each of the 50 states and Washington, DC, and for the nation’s 371 Metropolitan Statistical Areas (MSAs). You will find many MSAs where immigration is the only factor resulting in population increase. The pattern, however, varies widely with a few MSAs where the foreign-born share has declined.

For those concerned about the environmental impact of the rising population, this new resource is a valuable analytical resource for understanding how immigration contributes to urban crowding and sprawl.

population population growth
Previous ArticleAction Alert: House to Vote on McCaul Border Bill Next Week!
Next Article #3 of 5 – Five Things the Republican Congress Must Do in 2015 (with Resources)