You are at:Home»Politics»Executive Overreach for Haitians 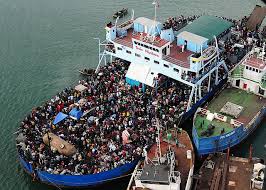 The Department of Homeland Security and a host of benefit-providing federal agencies briefed advocates and stakeholders on January 29 on current planning for the advanced parole of Haitian immigrants program announced by the administration last October. This program, called the Haitian Family Reunification Parole (HRFP) allows Haitians who are on a waiting list for an immigrant visa to come to the United States up to two years before they are eligible to receive the visa.

As the Federation for American Immigration Reform noted at the time the HRFP was first announced, “No legal authority exists for the president to parole broad categories of foreign nationals into the United States.” During the government’s briefing on how the program will be administered, the discussion was confined to the issue of the benefits that will be made available to the new arrivals and what implications that might have on their eventual ability to change their status to legal residence. According to DHS, the arriving Haitians would receive the same benefits already authorized under the Cuban-Haitian Entrant Program (CHEP) created pursuant to the Title V of the Refugee Education Assistance Act of 1980.  In effect, Haitians are being treated in a similar fashion to Cubans who enter illegally and gain legal residence under the Cuban Adjustment Act.

The objective of equal treatment with Cubans has long been a goal of the Haitian immigrant community, and they received a major gain towards that goal at the same time the administration is pursuing normalization of diplomatic relations with Cuba.

During the briefing session, there were numerous questions from state representatives and those of private voluntary organizations (PVOs) that will be tasked with providing services to the new flow of Haitian parolees. It was explained that the newcomers will be entitled to all of the benefits available to refugees even though they applied for admission as immigrants under one of the family-based priorities. Moreover, DHS is making them eligible for benefits, even though a family sponsor in the United States has provided a binding affidavit of support as part of the visa petition process. The newcomers will be immediately eligible for Medicare and SSI, and SNAP (the current acronym for Food Stamps) – unlike new immigrants who remain ineligible for those benefits for the first five years following their arrival.

The question was asked whether the receipt of those mean-tested benefits would make the newcomers ineligible for the eventual immigrant visa. The government’s response was “no.” The situation will be looked at when the decision is made to convert to legal permanent residence, and if the newcomer has by then found a job and earns enough to be self-supporting, the public charge ineligibility will be overcome.

The discussion made clear that in addition to simply increasing the flow of immigration into the country, a power reserved to the Congress, one of the major impacts of the administration’s program will be the expansion of federal and state outlays to provide welfare benefits for this new population. For the states that have no say in whether to provide these benefits, it is apparently another unfunded mandate.