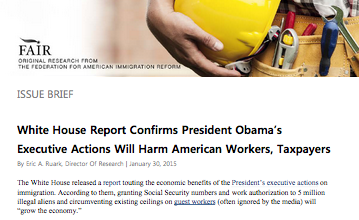 With (some) Republicans in the Senate willing to defend the Constitution against President Obama’s executive action, the White House has been touting a November 2014 report by its Council of Economic Advisors (CEA) that projects the president’s illegal amnesty and circumvention of ceilings on guest worker admissions will bring an economic windfall. The CEA said that “growing the economy” by adding millions more foreign workers would raise wages for the average worker and absolutely, positively would displace not one American worker because immigration has “no impact on the likelihood of employment for U.S.‐born workers.”

Guess who said exactly the opposite in 2006? Senator Barack Obama, who wrote that the “huge influx of mostly low-skill workers…threatens to depress further the wages of blue-collar Americans and put strains on an already overburdened safety net.”

The CEA report also directly contradicts the findings of the Congressional Budget Office (CBO) when it comes to the economic benefits of the president’s actions, despite the White House’s claim that it relied on the CBO’s methodology.