You are at:Home»Featured»Immigration Services in Spanish 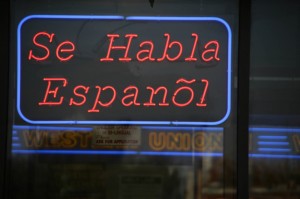 Newly installed director of Citizenship and Immigration Services (USCIS) Leon Rodriguez held a forum on the issues over which he is in charge on March 6 to both a live audience and more than 400 persons connected in a conference call. Unlike most government forums, however, this one was conducted exclusively in Spanish. Rodriguez did not need to use an interpreter.

Many of the questions from forum participants concerned the currently enjoined DAPA amnesty and other extended benefits for illegal aliens. Rodriguez expressed his confidence that the blocked benefits would eventually be forthcoming and insisted that even if an illegal alien has not yet obtained protection against deportation, those persons, “no tienen que temer,” [have nothing to fear].

Asked by a participant what she could do to assist others who are seeking to make the USA their permanent home, Rodriguez said that it is important for immigrants to tell their stories. He said the perceptions of immigrants as criminals need to be dispelled by the stories of courage and struggle to get here and to create a better life for themselves and their families.

Several of the questions from this Spanish-speaking audience concerned the problems of “notarios” [a term in Spanish-speaking countries to indicate a professional with legal training]. Because a notary public credential in the U.S. is easy to obtain and on the surface seems to be the same as the notario, many charlatans use the title to illegally practice as immigration attorneys without training in immigration law. They promise benefits when none are available and may actually harm the client. Rodriguez referred to the public efforts of his agency to warn the immigrant community regarding the problem.

What’s next? Requiring all federal employees dealing with immigrants to speak Spanish? Judges too? It might be a bit difficult to find nominees for the Supreme Court who are Spanish speakers, but ethnic advocacy groups would no doubt have some candidates.