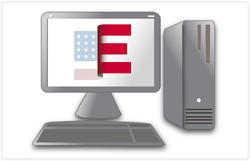 It is no surprise that business interests oppose a mandatory E-Verify system that is intended to deny jobs to illegal alien workers. The U.S. Chamber of Commerce supports mandatory E-Verify but only on the condition that federal law preempts states from taking any action to penalize employers who fail to comply. This newfound support for mandatory E-Verify came about after the Supreme Court decided against the Chamber (Chamber of Commerce v. Whiting) and in favor of Arizona, which had made E-Verify mandatory for all employers in the state and instituted penalties for those  criminal employers who failed to comply. Reading the writing on the wall, the Chamber shifted its strategy, while trying to portray itself as pro-enforcement. The Chamber recognizes that the federal government has failed to enforce existing immigration law, in large measure due to intense lobbying by the Chamber, and it is willing to bet it can forestall any vigorous implementation and enforcement of a national E-Verify system. President Obama’s unconstitutional and illegal executive actions on immigration, and the Republican leadership’s failure to take the necessary step to use the power of the purse to prevent them from being carried out, have demonstrated that a law passed by Congress is now is merely a suggestion.

If mandatory national E-Verify became law, such as proposed in legislation (H.R. 1772) authored by Rep. Lamar Smith (R-Texas), and Congress ensured that the executive branch complied in executing that law, employers who currently ignore the voluntary E-Verify system would have to begin screening new hires to assure that they are legally entitled to work. For some, that may endanger their current practice of ignoring the legal status of foreign workers, and this is leading to the use of scare tactics to stir up opposition in the business community and among the public to a national E-Verify system.

An example of this may be seen in an article in March 10 issue of The Hill written by Alex Nowrasteh of the pro-big business Cato Institute. He argues that the current E-Verify program “…sometimes rejects people who are legally eligible to work.” While that is true, he avoids clarifying that the number of such cases is a tiny fraction of cases and that there is a fail-safe system that is part of E-Verify to challenge and overturn erroneous negative results. The business lobby does not have a single compelling poster child of someone who was wrongfully denied a job by the E-Verify system, let alone a slew of legal workers who have been shut out of the job market by E-Verify.

Without the prospect of legal workers denied jobs, the argument by Cato and business interests is that the system proposed by H.R. 1772 would inevitably undergo ‘mission creep.’ Nowrasteh uses the Social Security number system as an example in which the SSN has become a much expanded personal identification system not envisioned at the time it was established. But, that argument suffers from the fact that the SSN, whether one supports this or not, now serves as an all-purpose identification system. There is no space for the kind of mission creep Cato threatens for E-Verify.

What is really at stake in the proposed legislation is a system to effectively deny the ability of employers to claim that they did not know they were hiring illegal workers. When that system is in place, both illegal border crossers and legal entrants who now violate their visa status by staying and taking jobs will be discouraged from coming and/or remaining by the lack of job opportunities. That is a key element in gaining border security.

The E-Verify system needs additional improvement because there still are millions of illegal aliens who have legally issued SSNs or stolen SSNs who should be screened out. But that is not the job of employers. That is a responsibility of the operator of the E-Verify system – the Department of Homeland Security – working with the Social Security Administration.