You are at:Home»Featured»Does the Pope’s View on Immigration Transcend Borders? Of Course! 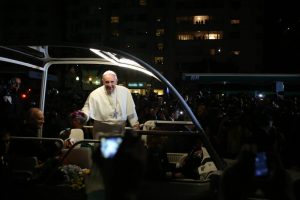 In Foreign Policy magazine, journalist Benjamin Soloway writes that the GOP may be in for a rude awakening when Pope Francis delivers an unprecedented address to Congress in September. He makes that assessment because the Pope has been outspoken on immigration. He notes that during the surge in unaccompanied minors from Central America entering the United States illegally, the Pope, “… argued that the children should be ‘be welcomed and protected.’

Soloway cites authorities on the Catholic Church who think the public position of the Pope on immigration may even be more liberal than that of President Obama, with whom he will meet. And he suggests that President Obama will try to depict the Pope’s position as favoring his efforts to push for an amnesty for illegal immigration.

If Soloway is correct, as seems likely, it should not come as a rude awakening to anyone. The Pope is head of a church that transcends boundaries, and, therefore, naturally looks at the issue of immigration from a universalist position rather than from a national perspective that should be expected of policymakers who set rules for the nation that reflect the best interest of the nationals of that country.

For that same reason, the position of the U.S. Conference of Catholic Bishops, “…opposes ’enforcement only’ immigration policies and supports comprehensive immigration reform.” Of course, the U.S. Catholic Church also has an interest in the welfare of its congregants who are illegally in the country, especially because the immigrant flow has contributed majorly to countering the increasing exodus from the Church of native-born Catholics.