You are at:Home»Federal»There’s Still More California Can Do for Illegal Aliens? 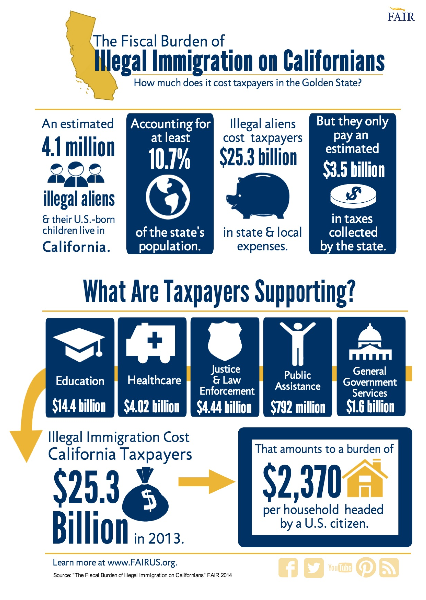 If you thought that there was nothing more California could do to protect illegal aliens or provide them with expensive public benefits, you’d be wrong. Very wrong.

So what’s left? Surprisingly, members of the California Legislature have found at least ten more benefits and services that the state can bestow on illegal aliens. The illegal alien caucus in the Legislature – which is pretty much all of them – has a ten-bill package of new goodies for illegal aliens that they hope to enact into law this year.

Topping the list of initiatives is getting every illegal alien in the state taxpayer-funded health insurance. One bill would make the estimated 1.5 million uninsured illegal aliens in California eligible for Medi-Cal, the state-run health care program for the poor. For the estimated 300,000 illegal aliens whose incomes are too high to qualify for Medi-Cal, State Senator Ricardo Lara (D-Bell Gardens) has a bill that would seek federal permission for them to buy subsidized health insurance through the state exchange set up under Obamacare.

Illegal aliens are explicitly excluded from purchasing insurance through state exchanges established under the Affordable Care Act, but the Obama administration rarely lets a little thing like the law get in the way of doing what it wants. But, just in case, Lara proposes that California establish a separate health insurance exchange if the feds deny California’s request.

A similar proposal stalled last year when legislative analysts estimated that covering illegal aliens would cost as much as $1.4 billion. But, Lara assures the public, he has trimmed some of the bell and whistles in his new proposal in deference to being “serious about our governor’s call to be frugal in how we conduct our business.”

If these legislators have their way, what happens in California won’t stay in California, but will become a model for the nation. “Our message to other states and to members of Congress in Washington, D.C., is that there’s nothing to be afraid of,” says de León.