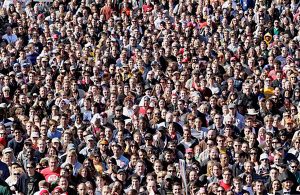 A new Congressional Research Service report issued April 22, 2015 found that, as the immigrant population rapidly increased as a result of the 1965 immigration law, the earnings of the lowest 90 percent of U.S. workers generally flat lined and continues to do so up to the present. This contrasted with the earlier period from 1945 to 1970 when immigration dropped slightly and US worker income nearly doubled.

This finding flies in the face of the hype of immigration boosters that immigration is an economic benefit for the country. The CRS report does not indicate how the top 10 percent of wage earners fared during the period of soaring immigration unleashed by the 1965 legislation, but widespread reports on the increased income disparity between top and bottom earners suggests that the income stagnation experienced by the bottom 90 percent did not coincide with a similar earnings stagnation by the wealthy.

Although this finding does not mean that the rising level of immigration – in both numbers and shares of the population – caused the wage stagnation or the increased income inequality, a report issued several years ago by the Council of Economic Advisors to the President identified immigration as one of the causes of increasing income inequality (along with off-shoring and automation). However, the coincidence between the two opposite trends, both beginning to be seen in the 1970 data, strongly suggests that increasing immigration is not the economic boon that its boosters have claimed.

This finding by the CRS should not come as a surprise. On FAIR’s website you will find a similar finding in a study we issued several years ago. See our Issue Brief on Low immigration and High Economic Growth.