You are at:Home»Immigration Issues»Hillary’s Hype: No Second-Class Citizens 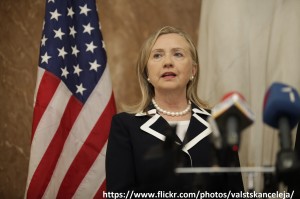 Hillary Clinton launched an effort to woo Latinos to her presidential campaign on May 5 when she accused Republican candidates of seeking to relegate immigrants to “second-class status.”

That accusation was political hype attempting to paint her potential opponents as anti-immigrant, but it also was a slam at the public. She apparently believes that the public is ignorant of what is required for an immigrant to become a U.S. citizen. She said she is committed to “a path to full and equal citizenship.”  For whom? The context made clear that she was talking about amnesty for illegal aliens. But, of course, she avoided that term.

So what was this second-class status she was accusing the Republicans of supporting? Anything short of amnesty for all of the illegal alien population would apparently constitute second-class status, in her view. That reference suggests that the illegal alien population already has some claim to parity with U.S. citizens but it is being denied to them by the evil Republicans. That flies in the face of the immigration law and the nation’s immigration history, both of which deal with selecting immigrants based on the country’s national interest.

That position means that Mrs. Clinton would put those who have broken our immigration laws on a par with – or more likely ahead of – those foreigners who are waiting for a visa to come legally as immigrants. It would mean further weakening the nation’s immigration laws by advertising that the country has no will to enforce them. And it would reward those employers who have exploited the availability of illegal alien workers by ignoring their lawbreaking and by encouraging a stream of new illegal workers to be similarly exploited. Mrs. Clinton apparently is more concerned about accommodating the illegal workers than she is about accommodating the millions of unemployed legal workers, a large segment of whom are young and looking for their first full-time job.