You are at:Home»Federal»Congress»Americans Serving their Country are Being Dismissed, Yet There’s Room for Illegal Aliens in the Military? 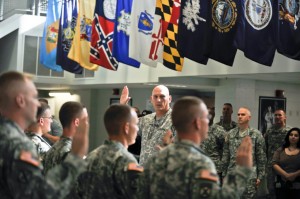 Army Col. Bryan Hilferty retired from military service last year. Col. Hilferty had served his country in the 1991 Gulf War and later served two deployments in Afghanistan. He would have liked to continue his career, but he was forced to retire because the military is downsizing.

Being forced to retire from a career he wished to continue is bad enough. The military, like other employers, sometimes makes decisions to reduce the size of its workforce. But now, members of Congress are poised to slap Col. Hilferty and many other servicemen and women in the face by attaching a provision in the National Defense Authorization Act (NDAA) that would allow illegal aliens to enlist and qualify for U.S. citizenship.

Supporters of turning the military into a vehicle for amnesty have, shall we say, an army of sympathetic human faces they like to put in front of television cameras and before congressional committees. Politicians like Rep. Mike Coffman (R-Colo.), one of six Republican House members to support the amendment offered by Rep. Ruben Gallego (D-Ariz.) speak glowingly of the illegal aliens seeking entry to the military. “There is no higher expression of citizenship than serving your nation in uniform. I am fighting every day to give DREAMers the same chance I had to serve this country,” Coffman said.

We don’t know precisely which young Americans seeking fulfill their “high[est]expression of citizenship” would lose that opportunity if illegal aliens are allowed to enlist. But we know that somewhere out there, some American who has done nothing wrong will not get to fulfill his or her dream.

Thankfully, Rep. Brooks’ amendment to strip the amnesty provision from the NDAA passed 221-202 last night. Enough members of Congress had in mind the consequences of their decisions on people like Col. Hilferty and the many young Americans who could be denied the opportunity to serve if the Gallego provision had remained in the bill.