You are at:Home»Immigration Issues»“Do we want to not have housekeepers?” Says Prof 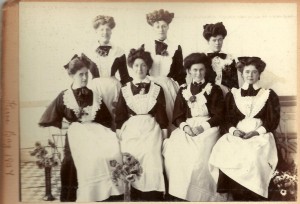 A UCLA professor in residence at the Institute of the Environment and Sustainability, Stephanie Pincetl, asked the above question in the May 24 Los Angeles Times in response to a campaign of Californians for Population Stabilization (CAPS) aimed at educating the public about the impact of immigration on population growth at a time of drought conditions. The perhaps facetious question exposes one aspect of the mentality of the champions of increasing the intake of immigrants – especially low wage workers such as nannies and housekeepers.

Besides the immigrants themselves – especially those who come illegally – the other major beneficiaries are their employers who benefit in lower wage costs as long as there is a surplus of available workers. The employers are not just lawn maintenance firms and janitorial services firms, but also include the well-to-do who can afford to hire household help while they pursue careers.

This may seem reasonable if you are a talented high-earner, but you are a hypocrite if at the same time you bemoan the nation’s growing income inequality, because you are contributing to that inequality it by relying on low-wage workers to support your high-wage lifestyle.

The educational campaign by CAPS noted that the rapid growth of population in California – and, therefore, the increase in human water consumption – is virtually all due to new immigrants and the children born to them after their arrival. One estimate is that the impact of immigration on population growth from 2000 to 2009 accounted for about seven-eighths of all growth. (See http://www.immigrationandpopulation.com).