You are at:Home»Immigration Issues»Where’s Waldo? 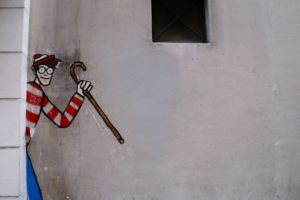 If Waldo is the illegal alien, he is certainly missing from the picture of the hard times for less educated Americans described by the Washington Post on June 11. The focus of the story is workers laid off as a result in a reduction in domestic petroleum production. Well paid petroleum industry workers are taking huge slashes in pay when and if they can find jobs.

The Post notes that wages in the petroleum industry had climbed 70 percent between 2008 and 2013 as production rapidly expanded (supply and demand at work) while, “Over the same period, in the economy at large, the median income for men with no more than a high school education fell by 6 percent, after adjusting for inflation.” That decrease points to a surplus of less educated workers competing for unskilled or low-skilled jobs. That’s where Waldo – the illegal alien – comes in. If it were not for the millions of unskilled illegal aliens competing for low-skilled jobs, there would be a tighter job market making it easier for the laid off petroleum workers to find jobs – and better paying jobs.

But, of course, Waldo is nowhere in the Post’s story.

To learn more about how illegal aliens impact jobs and our economy, check out some of FAIR’s other blogs here.