You are at:Home»Federal»Luis Gutierrez is Not Feeling the Love for Illegal Aliens from Bernie Sanders 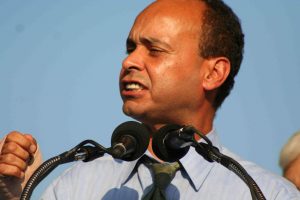 Make no mistake about it, Sen. Bernie Sanders supports amnesty for illegal aliens. But that’s not enough for strident open borders advocates like Rep. Luis Gutierrez (D-Ill.) who accused the Vermont Independent, currently seeking the Democratic presidential nomination, of not liking immigrants.

Sanders was making a campaign swing through Iowa, where he has been delivering a stump speech focusing on the economy and jobs. Sanders didn’t have much to say about immigration in his speech – or more specifically amnesty for illegal aliens – which led Gutierrez to speculate about whether, “the socialist—I can’t remember his name—from Vermont…likes immigrants because he doesn’t seem to talk about immigrants.”

For the increasingly belligerent open immigration lobby, the “anti-immigrant” epithet is no longer reserved for those who have the audacity to suggest that our laws actually be enforced. It can now be applied to those who do not show sufficient deference to illegal aliens on the campaign trail.

Gutierrez, it should be noted, is backing Hillary Clinton for the nomination. That would be the Hillary Clinton who, in 2003 on a New York radio station said, “I am, you know, adamantly against illegal immigrants…and people have to stop employing illegal immigrants,” but who more recently (in an apparent attempt to pander to Democratic Party’s left-leaning nominating base) doubled down on granting amnesty through executive action, promising to “go a step further” than what President Obama has tried.

Gutierrez is probably still reeling from Sanders past record on immigration issues. Surely the Chicago congressman knew that back in 2007 Sanders not only voted against President Bush’s massive amnesty and guest worker bill– but the Vermont populist gave one of the most impassioned speeches on the Senate floor detailing the grievous harm the legislation would inflict on working Americans. But after voting against the 2007 bill, Sanders voted for the 2013 Gang of Eight bill that included many of the same guest worker provisions.

But for Gutierrez and the narcissistic illegal alien lobby none of that matters. Unless you’re entirely focused on them and their demands, you must not like immigrants.