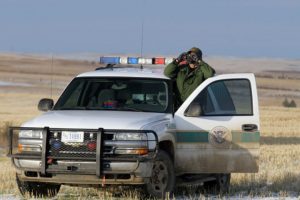 Last week, Texas Governor Gregg Abbott held a ceremony to sign a sweeping package of border security legislation into law. (Breitbart, Jun. 10, 2015) The legislation establishes a Child Sex Trafficking Prevention Unit, expands its border security law enforcement unit, provides assistance to the federal government at checkpoints located in the state’s border region, increases penalties to tackle human trafficking, and seeks reimbursement from the federal government for funds spent by state taxpayers on efforts to secure the border since 2012. Governor Abbott designated the bills as emergency items at the start of the 2015 legislative session.  With its passage, the legislation represents the most comprehensive effort by a state to participate in the enforcement of immigration laws along an international border.

The package of legislation included House Bill (“H.B.”) 10, H.B. 11, H.B. 12, Senate Concurrent Resolution  5, and Senate Bill (“S.B.”) 374. House Bill 11 contained the bulk of the law enforcement mandates. It expands the Transnational and Organized Crime Division within the Texas Department of Public Safety to address matters related to border security and organized crime; creates a prosecution unit to provide assistance to local prosecutors; provides the federal government assistance at the Texas-Mexico border checkpoints for the purpose of preventing the unlawful transfer of contraband and other unlawful activities between Texas and Mexico; and expands the crime of smuggling of persons. (H.B. 11) House Bill 11 was authored by Representative Dennis Bonnen, sponsored by Senator Brian Birdwell, and is estimated to cost the state $310 million during the next two years to implement. (Texas Tribune, May 26, 2015)

Governor Abbott also signed Senate Concurrent Resolution (“S.C.R. 5”), which authorizes the state to seek reimbursement from the federal government for costs incurred by state taxpayers to secure the Texas-Mexico border between 2012 and 2014, totaling almost $700 million. (S.C.R. 5) S.C.R. 5 was authored by Senator Craig Estes and sponsored by Representative Dan Flynn. The resolution expresses Texas’ dissatisfaction with the federal government’s “inadequate efforts” to secure the Texas-Mexico. (Id.) “Texas is willing to shoulder the responsibility; we expect the federal government to foot the bill,” Governor Abbott remarked. (Breitbart, Jun. 10, 2015)

In addition to border security legislation, Governor Abbott signed a bill to thwart the employment of unauthorized workers in the state government. S.B. 374, authored by Senator Charles Schwertner and sponsored by Representative Tony Dale, requires all state agencies to participate in E-Verify program to verify the work authorization of all newly hired employees. (S.B. 374)

Senator Birdwell, who sponsored H.B. 11 in the Senate, commented on the legislation. (Breitbart, Jun. 10, 2015) “In the absence of federal action, the state of Texas has shouldered the burden of stopping human trafficking, the smuggling of illegal drugs and weapons, and the potential influence of dangerous criminals and terrorists. Gov. Abbott signing HB 11 today will provide the resources for our law enforcement community to protect our citizens by interdicting these activities,” Senator Birdwell said. (Id.) In addition to problems related to human trafficking, gang violence, and drug trafficking, illegal immigration costs the state of Texas an estimated $12.1 billion per year. (FAIR, 2014)

The laws adopted by Texas support a role for local law enforcement to cooperate with federal immigration officials and mandating use of E-Verify provide a good model for other states – even states without an international border – to emulate. To be successful in deporting criminal aliens, the United States Immigration and Customs Enforcement (“ICE”) needs the assistance of state and local law enforcement agencies. In addition, state and local jurisdictions that cooperate with and assist the federal government in its immigration enforcement efforts see a dramatic decrease in illegal immigration and crime.

In total, the package of border security legislation is estimated to cost Texas taxpayers $800 million to implement in 2016 through 2017. (Texas Tribune, Jun. 9, 2015)