You are at:Home»Federal»Will the Supreme Court Uphold Immigration Policy by Executive Fiat Next? 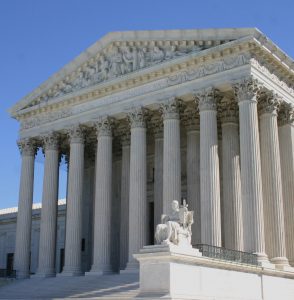 The Supreme Court has just decided two landmark cases. The first (King v. Burwell) was a decision to allow the federal government to offer subsidies in states that had not set up healthcare marketplace “exchanges” despite the fact that, according to Chief Justice Roberts, this ruling forced the Court to “depart from what would otherwise be the most natural reading of the pertinent statutory phrase.” The second decision (Obergefell v. Hodges) found that there is a constitutional right to same-sex marriage under the Fourteenth Amendment.

These high-profile cases raise questions about how the Court may rule on Obama’s definitively illegal and clearly unconstitutional actions to unilaterally grant amnesty to millions of illegal aliens and circumvent restrictions on the importation of foreign guest workers. At this point it is not certain that the case (Texas v. U.S.) will proceed any further than the Fifth Circuit.

If it does reach the Supreme Court, it will be the ultimate test of whether or not the American people, through their elected representatives, have any say over the nation’s immigration policies. If Justice Scalia is correct in his dissent from King v. Burwell that “words no longer have meaning” for the Court, than it is not a safe bet that a plain reading of statutes and a clear understanding of Congress’ intent will influence the thinking of the majority of the Justices in deciding Texas v. U.S.

This is why it is imperative that Congress act. The Republicans now control Congress, yet they have done nothing to prevent President Obama from violating the law and subverting the Constitution. Constitutionalists may rail against Justices Roberts and Kennedy (with good cause), but if Obama eventually gets his way on immigration through a favorable Court ruling, it will be John Boehner and Mitch McConnell who are most to blame.