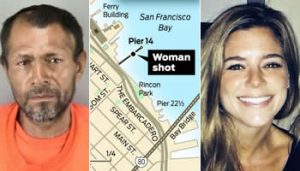 A recent poll from Rasmussen Reports finds that most Americans believe illegal immigration is increasing the level of serious crime in the USA. Fewer than 10 percent say it decreases the level of severe crime.

In other words, most voters are siding with Donald Trump at this point. Not surprisingly, the remnant legacy media are up to their usual games, claiming that there’s no good data so you don’t really know. They also claim that, by slicing and dicing, you can conclude the various immigrant groups don’t increase the crime level. All this in the relentless effort to prove that Trump is a liar, we’d assume. The Washington Post today gave Trump “four Pinocchio’s” for his claim. See a pattern here?

But even if it were true that illegal aliens commit fewer violent crimes, these are crimes that could have and should have been avoided if federal, state and local governments took immigration enforcement seriously. Kathryn Steinle in San Francisco would be alive today if immigration were properly controlled.