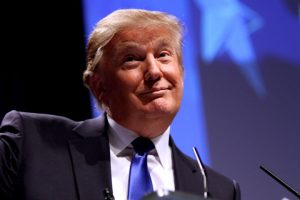 First, how on Earth did his Trump’s poll numbers rise after saying this?

It isn’t what he said it’s that he said something. Trump’s statement reflects the outrage and powerlessness the public feels about an issue that is spiraling out of control which the other candidates are dancing around. When Americans speak freely about immigration they’re often ignored, marginalized and demonized. Trump’s statements — while not delicate or entirely factual — tapped into that raw emotion. Most are not drug smugglers, or rapists. But the same open borders that have allowed millions of people to enter illegally in search of jobs, incontrovertibly allow dangerous criminals to enter as well. And this week, in the wake of Kathryn Steinle’s murder at the hands of an illegal alien deported five times, Trump’s comments have spurred a conversation about the link between crime and illegal immigration.

So are all illegal aliens criminals?

All illegal aliens break the law. The only way you can say they don’t is to claim we have no immigration laws.

The illegal alien population is composed of those who cross the border illegally and others who enter legally but overstay their visas. The former is a crime and the latter is a civil offense, both are deportable offenses under the Section 237 of the Immigration and Nationality Act, which says: “Any alien who is present in the United States in violation of this Act or any other law of the United States is deportable.”

So they violate immigration laws, what else?

Violating immigration laws is a serious offense. But if that’s not enough, consider this:  those entering the country illegally do not arrive with background checks in hand. Of those apprehended, the Border Patrol reports that 1 in every 12 illegal aliens has a criminal record. This begs the question of how many illegal aliens evade the Border Patrol and whether they have criminal histories. And even if an illegal alien doesn’t have a criminal history in the U.S. he may have one in his home country.

But even if an illegal alien doesn’t come to the U.S. with a criminal history, the initial breach of immigration laws is usually just the first offense in a series of other offenses including document fraud and identity theft and filing false information for jobs or benefits, all of which violate numerous state and federal laws.

What really is known about illegal immigration and overall crime stats?

Well, at least they’re all in jail or being deported aren’t they?

According to data published by the Center for Immigration Studies (CIS), derived from ICE, there are 168,680 convicted criminal aliens currently in the U.S. who have final orders of removal but who remain at large. In most cases, an immigration judge issues the order of removal when an illegal alien fails to show up for his deportation hearing and is never heard from again.

And of those ICE actively released back onto the streets from 2010 to 2014, 121 have been charged with “homicide-related crimes” according to fresh information provided by ICE to theSenate Judiciary Committee.

With regard to deportations, those numbers are falling faster year-to-year than the Chinese stock market.  In 2013, 368,604 illegal aliens were removed, in 2014 there were 306,000 removed and this year only 117,181 have been removed. Overall deportations are at their lowest point since the Ford Administration.

What is the acceptable level of crime we should tolerate from illegal aliens?

Ask the widows of Sacramento Deputy Sheriffs Danny Oliver and Jeff Davis who were recently murdered by Enrique Monroy-Bracamonte, a twice-deported, convicted criminal illegal alien who fired his gun in the face of both officers if even one crime is acceptable.

And, this week, consider if the family of Kathryn Steinle thinks there is any acceptable level of crime we should tolerate.

Trump wasn’t right and he wasn’t wrong. Ultimately he got us talking when we needed to the most.