You are at:Home»Federal»Walker Withdraws: What Influenced him on Immigration?

On Monday, Wisconsin Governor Scott Walker dropped his bid for the Republican nomination. Before dropping out, Governor Walker was one of only three out of the originally 17 Republican candidates who had even suggested our government ought to rethink rates of legal immigration with the needs of American workers, not employers, in mind. Eighty-four percent of Republicans are dissatisfied with the level of immigration we have now. Yet despite overwhelming support for reducing immigration levels, there are now only two candidates in a field of 15 supporting this majority Republican position. 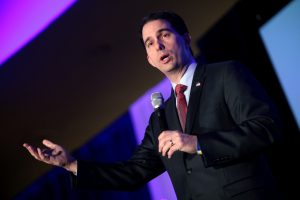 One reason is the excessive influence of business support for mass immigration. Back in February, three top Republican donors, health care CEO Mike Fernandez, fast-food CEO Andrew Puzder, and private equity manager Spencer Zwick, sent a message to all potential candidates. They, and their networks of large donors, want the Republican nominee to explicitly back amnesty and increased immigration during the primary. This puts Republican candidates (who are not billionaires) in the position of choosing between donors and voters.

Clearly Walker’s own past record of support for amnesty and pressure from deep-pocketed special interests left voters unsure of Walker’s commitment to true immigration reform. For instance, in August, Walker suggested that he favored eliminating birthright citizenship. Then, the next day, a prominent multi millionaire who had donated to his campaign, Stanley Hubbard, confronted him on the issue. Hubbard also said to the Washington Post, that he would “really quickly” change his allegiance in the race if Walker continued to push against birthright citizenship. He said, however, that he was still writing checks to Walker, as apparently, what Walker said had reassured him.

Nor was Walker anxious to come down firmly in favor of reinterpreting the birthright citizenship policy. On August 21, a few days after talking to Hubbard, he said he had “no position” on the issue. Then, when George Stephanopoulos asked him if he wanted to “repeal or alter the [citizenship clause of the]14th amendment,” Walker replied that “any discussion that goes beyond securing the border and enforcing laws are things that should be a red flag to voters out there who for years have heard lip service from politicians and are understandably angry.”

It appears that politicians altering their position on immigration after talking to large donors may be the real red flag to voters who are angry.