You are at:Home»Immigration Issues»50 Years of “Thoughtless” Immigration Policy is Enough: It’s Time for Thoughtful Reform 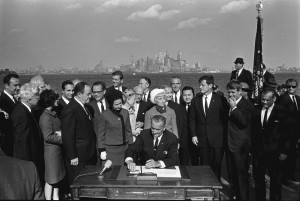 The historian Theodore White, one of the foremost chroniclers of the Kennedy and Johnson eras, described the Immigration Act of 1965 as “probably the most thoughtless of the many acts of the Great Society.” That law, which remains the basis for our immigration policy today, resulted in “a stampede, almost an invasion,” White wrote in 1982.

This past Saturday marked the 50th anniversary of President Johnson signing the 1965 Immigration Act into law. The results of this “thoughtless” law have radically reshaped the United States over the past half century and will continue to do so even more if it remains the core of our immigration policy for another 50 years.

Because of the Immigration Act of 1965:

These are the results of our legal immigration policies!

A half century of mindless mass immigration is enough. It is long past time for thoughtful immigration reform. First, we need to define a clear national interest objective for immigration and then design a policy that advances those goals.