You are at:Home»Immigration Issues»Asylum & Refugees»FBI Director Admits There Are “Certain Gaps” in Screening Process for Syrian Refugees 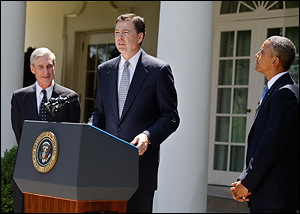 The Obama administration has announced its intent to admit at least 10,000 Syrians as refugees in the coming year. It is likely that the number could be much higher. Leaving aside the growing evidence that many of those fleeing Syria are economic migrants, not legitimate refugees, the plan to resettle Syrians in the U.S. poses significant security risks.

Testifying before the Senate Homeland Security Committee last week, FBI Director James Comey conceded identifying and screening out potential terrorists is problematic. “My concern there is that there are certain gaps I don’t want to talk about publicly in the data available to us,” he said. Comey’s concerns were echoed by Nicholas Rasmussen, director of the National Counterterrorism Center. “The intelligence picture we’ve had of this conflict zone isn’t what we’d like it to be… you can only review against what you have,” Rasmussen told the committee.

‘What we have’ and what we are likely to find out isn’t much, considering the complete collapse of civil society in Syria. Similar security concerns are being raised by German intelligence officials, where Syrians are being admitted in much larger numbers.

And even when we’ve had more to go on, our record of screening out security threats from that part of the world has been less than stellar. Comey admitted that we admitted Iraqis who had known ties to terrorist organizations, despite the fact that we had a strong military presence in Iraq at the time. He also conceded that “dozens” of refugees already in the U.S. are targets for ISIS recruitment.

“Certain gaps” might be more accurately characterized as ‘gaping holes’ that will pose dangerous security risks if the administration’s plans are carried out.