You are at:Home»Federal»Congress»McCain Still Out of Touch on Immigration 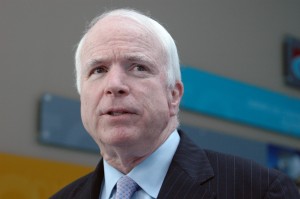 Yesterday, pro-amnesty Sen. John McCain (R-Ariz.) demonstrated that he is still out of touch on the immigration issue. In an interview with inside-the-beltway publication CQ Roll Call, the Gang of Eight Senator claimed it will be “extremely difficult” for Republicans to win the White House without passing “comprehensive” immigration reform.

Yet, the facts simply do not support that assertion. As FAIR pointed out back in 2013 that Mitt Romney’s “self-deportation” statement did not cost him the 2012 election, Republicans have an immigration problem and amnesty won’t solve it. Thanks to the 1965 rewrite of our immigration laws orchestrated by Sen. Ted Kennedy (D-Mass.), the U.S. now brings in individuals who are less-educated, less-skilled, and low income. Unsurprisingly, these individuals—when they become citizens—tend to vote for candidates who support robust social welfare programs. Not exactly the bread and butter of the GOP platform.

The presidential polling data reflects the fact that Hispanic immigrants overwhelmingly vote for the Democratic candidate regardless of the Republican candidate’s immigration position. While Mitt Romney famously won “only” 27% of the Hispanic vote in 2012, pro-amnesty McCain garnered just 31%–or a mere 4 percentage points more than the supposedly anti-immigrant Romney. Indeed, if amnesty was the key to locking up the Hispanic vote, George H.W. Bush should have won an enormous share during the 1988 presidential election two years after Reagan’s amnesty. Instead, Bush took just 30% of the Hispanic vote, a 7% decrease from Reagan’s 37% during his 1984 reelection in which he won 49 of 50 states.

The Republicans likely need to expand their voter base if they want to compete in national elections; amnesty simply is not the golden ticket claimed by some.