You are at:Home»Immigration Issues»Crime»Defenders of Illegal Aliens Mount Campaign to Protect Criminals 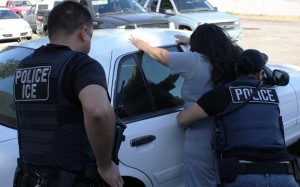 The ACLU and other defenders of illegal aliens have again taken to the sympathetic media – notably the Washington Post – to urge the administration to override the immigration law. The new situation has been triggered by the early release of about 6,000 convicted drug dealers under new sentencing guidelines.  According to ICE (Immigration and Customs Enforcement) 763 of the prisoners are aliens who have already been ordered deported by an immigration judge, and another 1,026 are aliens are also subject to deportation as soon as deportation proceedings are completed.

According to the Post the apologists for the alien convicts are seeking to bypass the law that ends the alien’s ability to appeal deportation once the deportation order is issued. They are seeking to give the aliens (meaning the lawyers representing the alien) a chance to seek a reprieve from deportation on the basis of hardship to family members in the U.S. or fear of persecution when they are sent back to their home country.

One argument that the defenders of the criminal aliens are making is that the aliens have already paid their debt to society by their imprisonment and it is not fair to deport them because that will be penalizing them again. This argument is ludicrous because the alien either has no right to be in the country – if an illegal alien – or violated the basis for being in the country legally by committing the drug dealing offense.

In typical fashion, the Post highlights two of the prisoners scheduled to be deported and interviews the family members residing in the United States who claim that they will be deprived of access to their family member if he or she is deported. What this attempt at creating sympathy for the criminal alien ignores is the threat to the U.S. community where the alien would reside if not deported. The purpose of deportation is to protect the U.S. community from those who have been convicted of criminal acts.