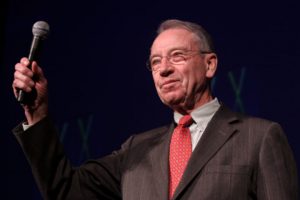 Senate Judiciary Committee members have acted on the article that IRLI published last week regarding the leaked DHS memos.

“Senate Judiciary Committee members are calling on the Department of Homeland Security to explain internal documents revealing plans to grant work permits to foreign workers in the country – potentially including illegal immigrants – who have been sponsored for a Green Card by their employer.  Incredibly, the memos expressly state that a benefit of the new executive action would be to “authorize the presence of certain individuals who are not here lawfully and address the needs of some of the intended deferred action population,” indicating that the proposal is calculated to evade a federal court injunction on such action.

In a letter to Homeland Security Secretary Jeh Johnson, Senate Judiciary Committee Chairman Chuck Grassley and his colleagues on the committee are calling on the department to explain the origin and status of the internal memos.  They are also requesting that the department explain its reasoning for ignoring legal requirements governing work-related immigration petitions.”