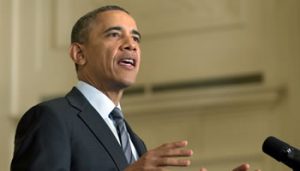 On Friday, it will be one year since President Obama announced that he would, by executive fiat, implement a great deal of his immigration agenda that Congress refused to pass by legislation. (See FAIR Legislative Update, Nov. 24, 2014; White House Immigration Action Page) At his orders, Department of Homeland Security (DHS) Secretary Jeh Johnson released twelve memos, outlining the immigration actions DHS planned to implement. (DHS.gov)

During the past year, DHS has been gradually implementing the executive actions announced that day and going further than ever before in rewriting immigration law. The courts have blocked the executive action that drew the most attention, the DAPA program and the extended DACA program. However, the administration has proceeded with most of the others, both through policy memo and through regulation. On Friday, to mark the anniversary, FAIR will release a report summarizing the status of the executive actions, as they have been implemented in their first year. Tune in to fairus.org  at the end of the week to learn more.