You are at:Home»Immigration Issues»Asylum & Refugees»Paris Massacre Must Lead Washington to Reconsider Mass Resettlement of Migrants 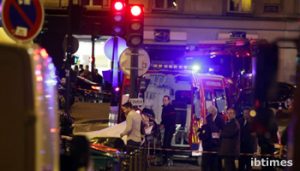 In the chaotic aftermath of last Friday’s deadly attacks in Paris, French and international authorities are still trying to sort out exactly who planned and executed the attacks, and how they managed to strike at the heart of a Western capital.

One thing we know for certain from Friday’s tragedy and from the terrorist attacks carried out in Paris last January: Europe has not succeeded in assimilating many Muslim immigrants or their European-born offspring. That failure threatens the very fabric of European democracy and culture.

So-called “homegrown” terrorists are, in fact, the products of recent transplants. Irrespective of who is at fault for the failure of the assimilation process, there can be no question that the consequences of not assimilating millions of immigrants and their children, who do not share Western cultural values, threaten our way of life.

The second thing that appears to be true is that the warnings issued by both European and American intelligence agencies were real: The massive and unregulated wave of migration sweeping across Europe poses a dangerous threat to the security of the West. The evidence strongly suggests that, as warned, ISIS (and likely other terrorist organizations) is using the situation to infiltrate the Western nations they have sworn to destroy.

At least one of the Paris terrorists possessed a Syrian passport that was registered as having passed through Greece, Serbia and Croatia in October. Whether the passport was real or forged is still unclear. It is also irrelevant. Amid the chaos, there is no way to verify the validity of travel documents — many of the migrants don’t even have identity documents when they arrive. Thus, their true identities cannot be known. Many are not even Syrian, but merely claim to be. Most importantly, there is no way for Western nations to ensure that the people who are being admitted are not security threats.

Despite the warnings of international, and even our own intelligence services, there is no indication that the Obama administration is reconsidering its pledge to admit at least 10,000 Syrians as refugees in the coming year (and possibly many times that number). Just last month, FBI Director James Comey testified before Congress that there are “certain gaps” (read: gaping holes) in our ability to screen Middle Eastern migrants. Comey’s assessment was affirmed by other intelligence officials.

FAIR does recognize the moral and humanitarian responsibility of the United States to accept refugees for resettlement in reasonable numbers. However, like the UN High Commissioner for Refugees, FAIR believes that resettlement should be a last resort, not a first resort, and that the primary objective should be repatriation of refugees to their homelands when conditions allow.

In furtherance of those goals, permanent resettlement should be afforded to those who are in the most imminent danger and whose prospects for successful repatriation within a reasonable period of time are least likely. Others should be provided protection and assistance in, or near, their homelands with the ultimate goal of safe repatriation. In all situations, the United States must be able to assess, with a high degree of confidence, that those who are resettled in this country do not pose a danger to American society.

FAIR has repeatedly objected to the overt politicization of refugee policy and to the abuse of “temporary” protection programs that are anything but temporary. These abuses make it more difficult for our nation to provide protection and resettlement to those who need it most.

FIX OUR EXISTING IMMIGRATION CHAOS BEFORE WE ADD NEW CHALLENGES

The U.S. already has existing national security vulnerabilities that this administration has adamantly refused to addressed. The border remains porous, many of the 9/11 Commission recommendations still remain unfinished including REAL ID and the implementation of an effective exit system to track overstayers, and the F-1 student visa program is replete with fraud and loopholes. Adding thousands of additional refugees — especially those from countries deemed high security risks — imposes additional burdens on a bureaucracy that has proven itself incapable of monitoring who’s who.

WHAT MUST BE DONE

In light of last week’s attacks and the frank acknowledgements from intelligence officials here and in Europe, the Obama administration must abandon its plans for mass resettlement of Middle Eastern migrants. If they don’t, Congress must stop them. To accomplish that, it’s time for Americans to ask their elected leaders important questions:

These are critical questions that must be answered because the first priority of any government is to protect the security of its people.

First, ISIS and other terrorist groups have vowed to use the freedom and openness of our societies to attack us. We must believe them. Second, even if the vast majority of migrants being resettled are not security threats, the Paris attacks (like the attacks of 9/11) prove that it only takes a few people to inflict catastrophic damage. Finally, we must undertake an honest assessment of our assimilation process. Regardless of whose fault it is, the failure to assimilate immigrants and their children into the economic and cultural mainstream can be lethal.

paris attacks refugees terrorism
Previous ArticleDonald Trump’s Invocation of Eisenhower and the Attacks in Paris: A New Call to Action
Next Article Tomorrow is Last Day to Help Stop the STEM Jobs Giveaway