You are at:Home»Immigration Issues»Tomorrow is Last Day to Help Stop the STEM Jobs Giveaway 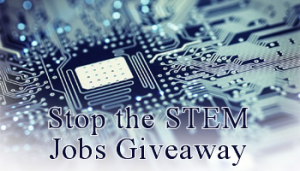 Tomorrow is the deadline for the American people to voice their opposition to the Obama administration’s plan to make it easier for the technology industry to hire cheap foreign workers instead of Americans. Bypassing Congress, the Department of Homeland Security (DHS) is planning, through regulation, to allow foreign science, technology, engineering, and mathematics (STEM) degree-holders remain in the country and work on their student visas for up to three years after they graduate. This is a blatant power grab by the Obama administration to rewrite our immigration laws and reward special interests at the expense of American workers.

By law, DHS must accept public comments on the proposed regulation and respond to them before implementing the change. This is your opportunity to make your voice heard. If there’s enough opposition, DHS might revoke the proposed rule and never implement it. Click here to visit FAIR’s website on the proposed rule, including information about how to comment and some useful points you can raise in your comment.