You are at:Home»Immigration Issues»FAIR Submits Comment to Stop the STEM Jobs Giveaway 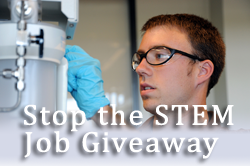 The Obama administration is trying to bypass Congress and make it easier for the technology industry to hire cheap foreign workers instead of Americans. Through a proposed regulation—which is open for public comment through TODAY—the Department of Homeland Security (DHS) is planning to allow foreign science, technology, engineering, and mathematics (STEM) degree-holders remain in the country and work on their student visas for up to3 years after they graduate. By law, DHS must accept public comments on the proposed regulation and respond to them before implementing the change.

Accordingly, FAIR has taken a stand against the assault on American STEM workers and submitted a comment in opposition to the proposed rule. Part of our comment reads: “Upon review, FAIR has concluded that the proposed rule serves no legitimate interest and harms American workers, especially recent graduates with STEM degrees. Instead, the proposed rule only benefits the technology industry’s desire for a reliable supply of lower cost labor. Foreign nationals would be taking jobs that otherwise would go to U.S. citizens. FAIR believes that our immigration system should supplement the American workforce not replace it. This rule is contrary to these principles, therefore, FAIR urges DHS to abandon the proposed rule.”