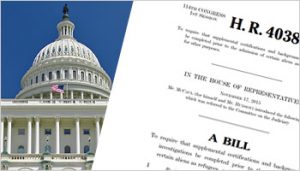 In response to last Friday’s deadly terrorist attacks in Paris, the House saw a flurry of activity in the beginning of the week with multiple bills introduced to block the resettlement of Syrian and Iraqi refugees in the United States. House GOP Leadership settled on bringing Homeland Security Committee Chairman Michael McCaul’s (R-TX) bill, the American Security Against Foreign Enemies (SAFE) Act, for a Thursday floor vote. McCaul’s bill, H.R. 4038, requires the approval of top national security officials before the administration can resettle refugees from Syria and Iraq. (See FAIR’s Summary of H.R. 4038) In an interview before Thursday’s vote, Speaker Paul Ryan (R-WI) said that we must “have higher standards placed upon [the refugee program]so that we can verify on a person-by-person basis, each and every single refugee, whether or not they pose any security risk.”

However, the American SAFE Act is a flawed bill that fails to completely stop or defund the current refugee resettlement program and cedes all responsibility to an already untrustworthy administration to verify whether any refugees present a national security risk. It also maintains the false assumption that it is possible to properly vet refugees from Islamic extremist hotbeds, provided new processes are quickly put in place. This ignores the grim realities of the situation on the ground as well as susceptibility to radicalization once refugees arrive. Despite the bill’s shortcomings, President Obama threatened to veto the House bill ahead of the vote, saying that its verification requirement would create “significant delays and obstacles” for the existing refugee vetting program.

In an attempt to address the bill’s core flaws, a group of House Republicans led by Rep. Brian Babin (R-TX) introduced an amendment that would have placed a six-month moratorium on refugee resettlement. (Breitbart, Nov. 18, 2015) The amendment also would have required a Government Accountability Office (GAO) study within 90 days to assess the economic impact of refugees on state and local governments. (Id.) However, House Rules Committee Chairman Pete Sessions (R-TX) announced that the bill would be voted on under a closed rule, effectively blocking any amendments — including Rep. Babin’s — from being offered to the bill. (Id.) The bill subsequently passed in its original form with a 289-173 vote — a majority sufficient enough to override an Obama veto. (Roll Call Vote #643) If the Senate takes up the bill, it likely won’t be until Congress returns in December from the Thanksgiving recess.

With the passage of a bill that fails to address the underlying problems, the next opportunity to truly stop Obama’s refugee resettlement program would come as part of the omnibus spending bill that must be passed to fund the government in early December. FAIR is supporting an effort by Rep. Babin to include specific reforms, security measures, and oversight requirements for the refugee resettlement program in the omnibus spending bill. (See FAIR Action Alert) Under this approach, the program would be suspended in its current form until reforms are implemented and Congress agrees to resume the program by joint resolution.

House house or representatives refugee refugee crisis refugees Syrian refugees
Previous ArticleDeporting Illegal Residents is Not Punishment
Next Article What Can Leaders Do to Address the Impact of Refugee Resettlement?