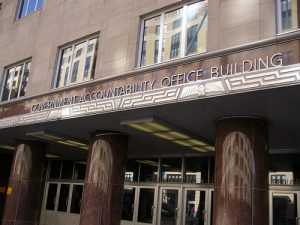 The Government Accountability Office (GAO) issued a report December 2 that faulted the U.S. Citizenship and Immigration Services (USCIS) branch of DHS for not having systematic controls against asylum fraud. It noted a case in 2014 in which more than 4,500 approved asylum applications that had been filed by one firm were found to be based on fraud.

There are two sorts of asylum cases: aliens who arrive at a port of entry and ask for protection against being sent back to a homeland where they fear they will be persecuted are termed affirmative claimants. The other defensive claimants are persons already in the country seeking to avoid deportation because they are illegal residents. The latter cases that give rise to fraud claims. The illegal residents have recourse to legal representation from legal aid clinics and lawyers who coach applicants in what may convince an immigration judge to approve an application. In addition to the massive fraud case referred to above, other notable cases have documented fabricated stories of past or future persecution. The difficulty in evaluating unsupported claims means that the applicant often receives the benefit of any doubt.

This means for immigration lawbreakers to avoid deportation acts as an incentive for others to follow the same path to legal residence. Over time, the asylum ground rules have broadened to include protection against abuse for sexual orientation, for spousal abuse, for tribal practices of genital mutilation, etc. And U.S. Foreign Service Officers, who have in-country experience regarding local conditions have been excluded from a role in routinely commenting on the likely veracity of the asylum claims.

The GAO states, “USCIS and the Department of Justice’s (DOJ) Executive Office for Immigration Review (EOIR) have limited capabilities to detect asylum fraud.” It issued eleven recommendations for changes in the handling of asylum cases and fraud investigations. These recommendations are a clear indictment of USCIS’s current ad hoc and lax policies for combatting asylum fraud.