Donald Trump has once again taken control of the headlines, this time for his proposal for a ban on Muslims entering the U.S. “until our country’s representatives can figure out what is going on.”

Even though it may seem like a year ago, it’s worth rewinding to the events of last week. In particular it’s worth revisiting the media feeding frenzy over the apartment of Tashfeen Malik and Syed Farook. It’s important in understanding why the media and many commentators are unable to comprehend the current terrorist threat and why Trump’s policy is likely to gain in popularity. Whether it should or not, is a different question.

After the media went into the terrorists’ apartment, they immediately began rummaging through the belongings and furnishings left behind after the FBI had removed evidence.

What did they find? 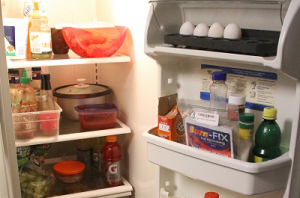 Ultimately, what the media found was a typical American apartment.

For all the rummaging what the media coverage did not find was an explanation.

And that is what should scare to death anyone who supports the status quo on immigration. Because despite being “assimilated” in every material sense, down to the Nestle infant formula on the counter, Gatorade in the fridge, the pressboard cabinets and cheap furniture, this second generation immigrant and his immigrant wife assembled an arsenal of pipe-bombs and guns and killed 14 people after pledging allegiance to a foreign terrorist force aimed at establishing an Islamic Caliphate out of the ruins of Syria and Iraq.

When State Department spokeswoman Marie Harf said earlier this year that “We need … to go after the root causes that leads people to join these groups, whether it’s lack of opportunity for jobs . . .[The U.S. should] help them build their economies so they can have job opportunities for these people,” she was pilloried. In this case, Farook was employed by the county of San Bernardino as an environmental inspector and earned above the median wage. Other Islamic terrorists were similarly gainfully employed.

What the morbid media frenzy in that Redlands, California, apartment last week really exposed is the limits of viewing terrorism through a materialist lens. There was no “smoking gun” among the possessions left strewn behind after the last camera crew had departed. Instead, there is only a realization that the task of trying to identify who among the Muslim immigrant population is likely to radicalize and commit terror is much harder than our media and governmental elite want to admit.

We need to re-assess our immigration policy and let in a smaller number of people. The amount or type of screening that we are doing right now is not working. Farook’s wife was admitted legally on a fiancé visa after screening. It will probably require a much closer look into prospective immigrants’ religious beliefs and associations than proponents of mass immigration want. It will require doing away with un-screened foreign visitors which are allowed under the visa-waiver program.

Here is the challenge for people who oppose Trump’s position: What change to our immigration system would you put in place to prevent future terrorist attacks, knowing that each additional attack (and there will be more) will likely strengthen Trump’s support? As Dilbert creator Scott Adams has suggested, any plan beats no plan at all. If our government can’t credibly respond on what it is doing to prevent attacks, then the only person proposing to do something gets a boost.

Donald Trump terrorism trump
Previous ArticleGrassley Finds Thousands Of Guardians Of Illegal Alien Children Unvetted, Have Criminal Records
Next Article History Repeats Itself: What Trump and others can learn from the 1924 Immigration Act